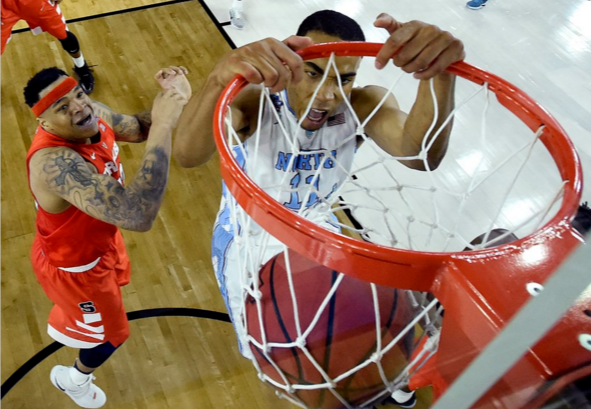 In order to appreciate North Carolina’s win over Syracuse in Saturday’s second Final Four national semifinal, you need to go back in time… but not very far.

This past Sunday, in what amounted to a second ACC tournament in March, Syracuse and North Carolina both made their way to the Final Four with wins over conference foes. Syracuse completed a remarkable comeback against Virginia, while North Carolina fended off Notre Dame.

Virginia utterly crumbled when Syracuse — down 54-39 midway through the second half — made its big push. The Cavaliers never found the backbreaking shot or the important offensive rebound which stemmed the tide. The Hoos have to live all offseason with what they allowed to happen.

Later that Sunday night, North Carolina — leading 51-40 midway through the second half — watched Notre Dame uncork a 12-0 run for a 52-51 lead. The Tar Heels could have dissolved into a puddle of panic the way Virginia did. Instead, they responded with a 12-0 counter-surge and won going away.

Syracuse was the team with a knack for making the late run by stopping opponents cold. The Orange allowed Gonzaga three points in the final six minutes of their comeback win in the Sweet 16, four points to Virginia in the final 7:30 of Sunday’s rally.

North Carolina was the team which stayed the course and didn’t allow runs to rattle anyone on the floor.

Which side would win out on Saturday in Houston?

The answer could not have been any clearer.

The Tar Heels picked each other up. With trademark composure, they lifted themselves into Monday night’s title game against Villanova. 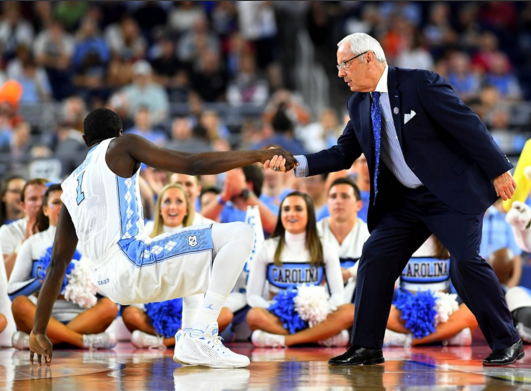 Midway through the second half — in what had appeared to be a runaway — Syracuse suddenly found a burst of inspiration.

Trailing 57-40, the first 10 seed to ever play in a Final Four unfurled 10 straight points.

When Malachi Richardson, one of Syracuse’s more effective players on Saturday (7 of 14 from the field, 17 points) hit a long three, a previously dead NRG Stadium came to life.

The Orange were on the comeback trail again:

For a brief moment, we were all wondering if the improbable could happen again.

As improbable as Syracuse’s surge was against Virginia, this would have been 100 times more brain-busting. Just consider the following historical fact, mentioned at halftime of a game UNC led, 39-28:

Carolina 40-0 in NCAAs all-time when leading by double-figures at the half. Boeheim hears this, scoffs, yells at Gumbel.

The 11-point Carolina lead at the intermission was forged despite the fact that UNC’s star player, Brice Johnson, got into early foul trouble and played limited minutes. The Tar Heels also established their working margin despite going 0 for 10 from 3-point range. Marcus Paige — who lit up the nets in Philadelphia during the East Regional — was 1 of 6 from the field in the first half, 0 of 3 from long distance.

North Carolina played a first half which was average at best. The idea that the Tar Heels would then give up a 17-point lead without hitting at least one three-pointer was hard to believe.

Then again, everything about Syracuse’s run to the Final Four has been impossible to wrap the mind around.

There were the Tar Heels, up only seven, facing the onrushing Orange tidal wave. Would this team respond the way it did versus Notre Dame, or would Carolina descend into the paralysis which afflicted Virginia on Easter Sunday?

… but this was the run-stopper from Carolina.

Instantly, the energy of this game changed.

North Carolina never led by fewer than nine points the rest of the way.

Since the Orange were limited on their bench — partly by necessity, partly by choice — the Tar Heels’ ability to stop that big push represented this game’s most decisive moment. By increasing the lead to 12, even for just a short while (Syracuse’s Trevor Cooney hit a three to push the deficit back to only nine), UNC sent the message to its ACC foe that the long climb to victory would be longer and more arduous than against Virginia.

It’s part of the art of protecting leads: Make sure the opponent doesn’t erase most of the deficit quickly. Merely slowing the rate of a comeback can buy time and take away the trailing team’s legs. North Carolina did that with its brief and timely burst of three-point shooting. UNC’s very weakness for most of the season — in many ways a reason the game was as close as it was at halftime — nevertheless became the reason the only 1 seed left in this tournament was able to put the Syracuse fairy tale to bed.

The Tar Heels ripped off a quick 10-3 counter to re-establish a 67-53 bulge with 6:10 left, and the Orange had no juice left. Their dominance in the first 28 minutes — when they constructed their lead — was not wasted:

Pastor Tim would LOVE this unselfishness from Paige.

It won the official ACC Tournament in Washington, D.C.

Now, the Tar Heels have won this four-team ACC mini-tournament over the past two rounds of this tournament.

Size, length, rebounding, and Marcus Paige’s timely three-point shooting have all helped North Carolina reach Monday night against Villanova. That said, the biggest ingredient in Carolina’s run to the final game of the college basketball season is something found between the ears: composure.