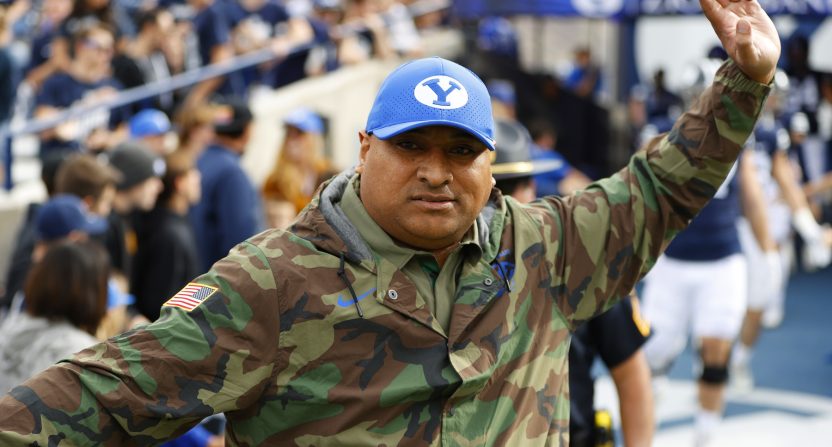 The Oregon Ducks were thrown full-force into the whims of the coaching carousel on Monday when Mario Cristobal agreed to leave to become the new head coach of the Miami Hurricanes. The Ducks had found some semblance of stability in Cristobal following the extremely short Willie Taggart era, but now they’ll need a new leader to help return the program to the heights it had back under Mike Bellotti and Chip Kelly.

Kelly is a name that many have thrown around but he’s currently coaching Pac-12 rival Chip Kelly. Meanwhile, one coaching name has popped up and could potentially get an interview soon. BYU head coach Kalani Sitake, currently in his sixth season at the helm with the Cougars.

Hearing that Oregon is requesting Kalani Sitake to interview. Whether or not he does remains to be seen.

Sitake has seemingly worked out the kinks from his first few years and has the Cougars finishing with double-digit wins in the last two seasons. They’re currently preparing for the Independence Bowl, their fifth bowl appearance in six years under the head coach.

Sitake was the associate head coach and defensive coordinator for Oregon State in 2015 and he spent a long time at Utah, so he knows the Pac-12 pretty well.

It remains to be seen if the 46-year-old is given the okay to interview with Oregon, and if he even wants to, but in the meantime the mention of his name certainly has some college football folks talking. BYU supporters, for their part, are not pleased.

Can someone please get Kalanis extension pushed through approvals already? https://t.co/rzqU3lDYnj

Will it turn out to be Oregon vs BYU in the next round of the Coaching Carousel? https://t.co/zTU9fU6avu

I'm sorry, but 2021 would go from extreme highs to extreme lows to end the year if Kalani leaves. Bad enough we have to deal with the crap from Sunday, and bad reffing tonight, to lose Kalani…stick a fork in me…I'm done. https://t.co/LmyXixncSF

Love this. Kalani’s agent leaking this to create leverage for Kalani to get more resources for the football program. Don’t mess this up BYU. https://t.co/y04p7ntUrA

We’ll see if this has any legs or, as some BYU folks are hoping, this is just a ploy for Sitake to get an extension with the school. Either way, you never quite know when the carousel is going to stop spinning and your school will suddenly find itself without a head coach.