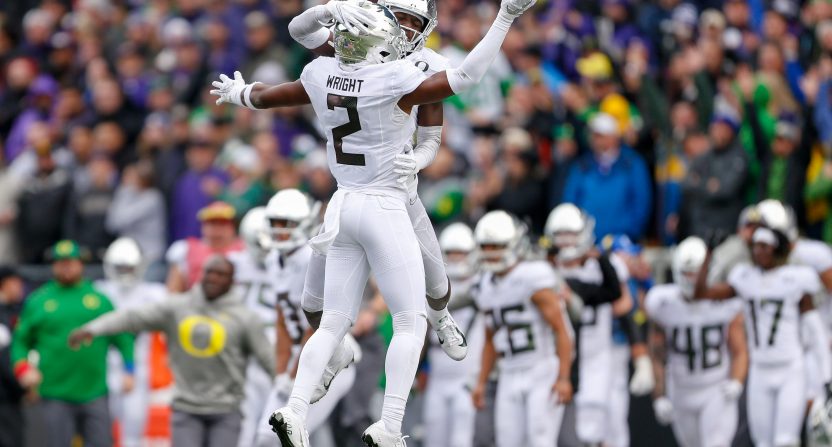 For many, the idea of a team from the Pac-12 fielding a team in the College Football Playoff may have vanished just weeks into the season. But here come the Oregon Ducks, fresh off a hard-fought road victory at No. 25 Washington, to issue a reminder that they should still be on your radar.

Oregon was down 28-14 in the third quarter on the road against the defending Pac-12 champions and the gold standard of the conference the past few seasons. If Oregon’s playoff hopes were going to be laid to rest, this would certainly be the most appropriate setting for it to take place. Like Hulk Hogan hulking out just when the ref is about to call the match, the Ducks were ready to go on a run to take over full control of the Pac-12 North Division. A 10-play drive on the ensuing possession was capped by a 14-yard touchdown run by Cyrus Habibi-Likio to bring the Ducks within seven. After a Washington field goal pushed the Husky lead up to 10, Oregon responded with another 10play touchdown drive. This time it was Justin Herbert delivering on a 4th-and-3 with a short little pass that turned into a 36-yard touchdown pass to Mycah Pittman.

Still within three points of Washington midway through the fourth quarter, Oregon took over the ball from their 30-yard line after forcing a three-and-out against the Washington offense (three striaght runs may have worked some clock but a quick drive was no good for the Huskies in this spot). A quick 20-yard pass from Herbert to Johnny Jonson III took the ball to midfield on the first play of the series, and the Ducks were cooking. Travis Dye had a 21-yard run and the drive ended with Herbert connecting with Jaylon Redd for the lead on a five-yard pass.

Oregon outscored UW 21-3 down the stretch to take full control of the North. Best win for the Ducks since …

(It has been a while)

Since dropping the season opener in Arlington to Aubrun, 27-21, in a dramatic finish, all Oregon has done is win their last six games. Say what you may of the strength of schedule, the fact is Oregon has done everything they needed and were expected to do (the Ducks were a slight road favorite at Washington, and they covered), which you can say about a handful of teams supposedly on the College Football Playoff radar. Perhaps the playoff conversation gets overblown, but Oregon has given the Pac-12 a one-loss team that controls the fate of the Pac-12 North the rest of the way. That could pay dividends for the conference down the line. Oregon now owns a two-game lead in the loss column in the Pac-12 North, ahead of Oregon State. Every other team in the Pac-12 North — Stanford, Washington, Cal, and Washington State —  has three losses in conference play, and Oregon now owns head-to-head tiebreakers against Stanford, Cal, and Washington. Even a total collapse by Oregon at this point could still end up seeing the Ducks in the Pac-12 championship game. That is a good spot for the Ducks to be in with five games remaining in the regular season.

So what if Oregon is a one-loss Pac-12 champion? Would they be awarded a spot in the playoff? That is still difficult to say at this point given the landscape around the rest of the country right now. Things will definitely change in the coming weeks as more becomes clear in the playoff conversation. But Wisconsin lost to Illinois today and a few undefeated teams are still scheduled to play each other (Alabama-LSU, potentially Ohio State-Penn State?).

For now, Oregon should do what every other team tries to do and focus on things one week at a time. If Wisconsin can lose at Illinois, then who is to say Oregon can’t lose to USC or Arizona State on the road? The playoff discussion should be saved for later, if it is still warranted. One thing is becoming pretty clear, however, and that is Oregon is going to play for its first Pac-12 championship under head coach Mario Cristobal.