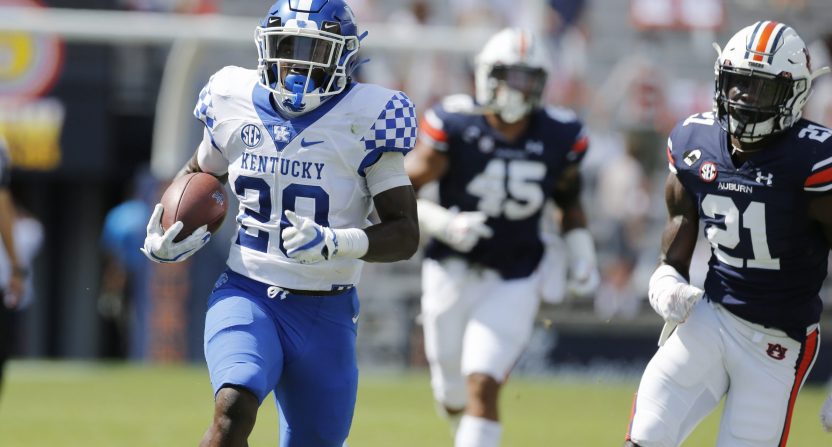 There are a lot of great names out there in college football. Here at The Comeback, we came up with a list of some of our favorites. To make it more of a challenge, no nicknames allowed. So sorry. Our apologies to Pig Cage, Kool-Aid McKinstry, Smoke Monday, Phat Watts, and Chief Borders.

Sellers Shy is an unusual moniker. It’s also one of the most SEC-sounding names you’ve ever heard. His full name is David Foote Sellers Shy Jr. If you follow golf on TV, you might be familiar with his father also of the same name. The 49-year-old Sellers Shy is CBS Sports’s lead producer for the PGA Tour. The son went to his dad’s alma mater as a walk-on, where he appeared in one game as a true freshman. He’s a converted wide receiver after playing quarterback in high school in Memphis.

Me: There is not a more Ole Miss name than John Rhys Plumlee

North Carolina leads the nation in players named after TV people (more on that later). The Charlotte Observer reported that Power Echols’ first name was inspired by TV actor Powers Boothe. His mother Astarlove Robinson (yep, nicknamed Star) loved the name, but she decided to forgo the “s.” Sports runs in the family too. Robinson played basketball at Western Michigan, and Power’s dad Brian Echols played football at Michigan State. Power Echols will try to make a name for himself as a freshman. The four-star recruit could contribute early for the Tar Heels.

If you’re familiar with former Wisconsin basketball player Duany Duany, you probably have already guessed the origins of the name Ajou Ajou (pronounced uh-JOE). His parents are from South Sudan, and having first and last names that are the same is a Sudanese tradition. Ajou grew up in a small town in Canada, but he played his senior year of high school in Florida. He’s Clemson’s first Canadian recruit. Last season as a freshman, he caught two passes for 41 yards. This year, he’s expected to have a much bigger role.

On paper, there’s no scarier name in football than Demon Toye Clowney. If you didn’t know better, just saying it would give you chills. However, it’s pronounced Da-Mon. His name should sound familiar. Demon is a cousin of Tennessee Titans’ Jadeveon Clowney, the former No. 1 overall pick in the 2014 NFL Draft out of South Carolina. While Jadeveon Clowney was the nation’s top high school recruit, Demon Clowney is “merely” a four-star recruit. He was a backup defensive end last year and kept his red-shirt. Demon bulked up to 255 pounds and figures to contribute as an edge rusher.

Charleston Rambo sounds like an unfinished Sylvester Stallone movie script that failed to launch. The Oklahoma transfer fully embraces the attention his name brings. He loves to watch Rambo movies and even wears Rambo t-shirts.

He told The Oklahoman, “It really excites me — Rambo and John Rambo and he goes hard and I’m trying to go hard on the field. I’m just trying to have a killer instinct like him.”

The speedster transferred in January to The U, where he’ll have two years of eligibility remaining. Last year he caught 25 passes for 312 yards and three touchdowns.

You know you’ve captured the public’s imagination when your name is featured on Jeopardy! He was the $600 answer from the category 2018 college football names. A contestant named Mary Ann correctly answered Arkansas. The story behind Bumper James Morris Pool’s name is a little complicated. According to wholehogsports.com, he was born James Morris Pool, named after his paternal grandfather. But he’s had the nickname Bumper since birth after it was given to him by his father. When Bumper Pool was 16, he legally changed his name. He finished second on the team in tackles (101) last year.

Storm Chandler Duck is an emerging star with a fabulous name. A member of Mack Brown’s first recruiting class, Duck first got on the national radar after a promising freshman year in 2019. That included an interception returned for a touchdown against Temple in the Military Bowl. Duck missed the final 10 games of last year due to injury, but he’s expected to make an impact this season. According to the Raleigh News & Observer, his mother named him after The Bold And Beautiful soap opera character Storm Logan. The family name comes from Native American ancestry.

We have a bit of a mystery here. According to the Los Angeles Times, we know two key details: he’s named after his grandfather, and he has never been to New Zealand. That’s it. This, of course prompts so many questions: What do his teammates call him? Is he known as ‘NZ,’ ‘The Kiwi,’ ‘New,’ or ‘Zeal’? Williams will be a freshman for the Aztecs after playing his high school ball in Southern California. Interestingly, there he was teammates with … General Axel Booty. Yes, he of the famous Booty family. Booty doesn’t qualify for this list because he’s playing in junior college.

No player is better positioned to take advantage of NIL laws than Buck Coors. His name makes you want to grab a beer. He should dye his hair so he could be the Silver Bullet (“Won`t slow you down!”)  Coors is even from Colorado (Golden). Haven’t seen anything that would indicate he’s related to THE Coors family. If not, they should make him an honorary member. He played quarterback in high school but moved to the secondary in college. Coors, who red-shirted last season, will have people across the nation rooting for him and toasting him – if he ever scores a touchdown.

Yep, sounds like Courvoisier. Another NIL opportunity!  Courvoisier’s own website describes its cognac as “very smooth with an excellent balance.” Isn’t that how most running backs would like to be described as? Surprisingly Kavosiey prefers to be called by his last name.

“I don’t like it when people call my name wrong,” the 5-9, 201-pounder told The Louisville (Ky.) Courier Journal. That makes me kind of mad. People know my name, but they say it wrong still. I just like to be called Smoke.”

If you’re curious about how he got his first name, so is Kavosiey, who says he doesn’t know. We hope to hear it a lot this fall. It’s fun to say.

Don't go to sleep on #UKFootball Kavosiey Smoke… but at least get the name right! pic.twitter.com/nBloCJNpha