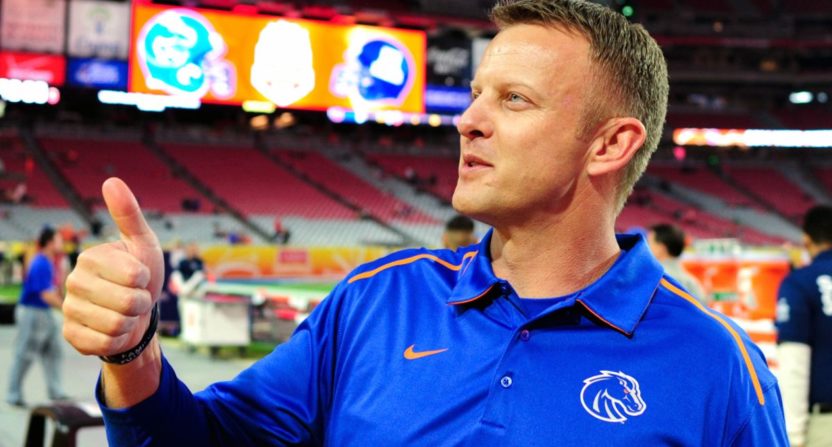 Each Wednesday, our staff at The Comeback comes together to share our opinions on various college football topics. This week, we’re looking at the Mountain West conference and our attention at the roundtable turns to Boise State and head coach Bryan Harsin.

In his first year as head coach, Bryan Harsin led Boise to a Mountain West Title in 2014. But it’s now been two years since, and he’s still trying to get a second one. Now that Chris Petersen is doing his thing at Washington, will Boise still be what we all saw under Petersen, or will we look back after a few more years and see a program that simply won’t be what it was under its old coach?

Yesh Ginsburg: It seems clear that Bryan Harsin is no Chris Petersen. Then again, there are very few coaches in the country who are on par with Chris Petersen, so that’s not a very bold statement. It would be ridiculous to expect Boise State to remain at the same level after losing both an all-time great college quarterback (Kellen Moore) and the best coach in program history.

Harsin has had moderate success at Boise State, including a Fiesta Bowl win, so he’s clearly not the wrong coach for the program. Are there other coaches out there who might be able to bring the Broncos back to being legitimately in the Playoff (then-BCS) conversation? Probably. Can Harsin do it? It’s still early, but right now it seems like he can’t. He might be good enough to keep Boise State in the New Year’s Six conversation most years, but if the Broncos want a return to their glory days they need someone just a cut above him.

Matt Lichtenstadter: What Boise State has done to become a dominant Group of 5 program throughout the years is truly remarkable. With the talent disparity that exists in college football, it really is amazing to look back on what they have done. But as time has passed, other schools from the Group of 5 conference have joined Boise State in becoming solid and consistent programs, and the Broncos are now finding it difficult to keep up. They’re by no means bad or irrelevant, but the days when they were consistently the best non-BCS and now non-Power 5 program are probably behind them.

The Mountain West has gotten better as everyone has tried to gun for the Broncos. And when there was a slight slip under Bryan Harsin, other schools took advantage of the gap. This should, in theory, make the Broncos better, but it remains to be seen whether they find the magic they did under Chris Petersen. They have all the tools to do so, but in this new era in college football and without a transcendent coach, they will find the going tougher to consistently be the best Group of 5 team there is.

Terry P. Johnson: Full disclosure: Bryan Harsin’s Twitter has blocked me. Your guess is as good as mine as to why this is, but I think it’s only fair to point that out.

To answer the question, I think Coach Harsin is a great coach. His numbers as Boise State’s offensive coordinator speak volumes about his knowledge of X’s and O’s. After all, there aren’t many coaches that could have engineered a comeback like the one we saw in the 2007 Fiesta Bowl.

With that said, he’s still unproven as a head coach. In his first season at Arkansas State, he inherited 12 starters from a squad with back 10-win seasons, but finished 7-5 overall with a 5-2 mark in conference play. It’s been more of the same at Boise, where he won the Mountain West in his first season, but failed to win the division in the next two.

And, let’s not forget, the Broncos haven’t beaten Air Force under his watch.

Does this mean that Harsin isn’t the right guy to lead the program? Certainly not. After all, there were plenty of “pundits” who said Bobby Bowden and Tom Osborne couldn’t win the big one. Look how wrong they were.

However, the fact remains that Harsin walked into a program that’s accustomed to winning championships. Remember, the last time that Boise State failed to win at least a share of the conference championship in back-to-back seasons was from 1995-98 when the team was a member of the Big Sky conference.

Of course, without amount of talent that the Broncos return this fall, this question might become an academic exercise. Look for Boise to win the Mountain West this fall and snap this “slump” in 2017. 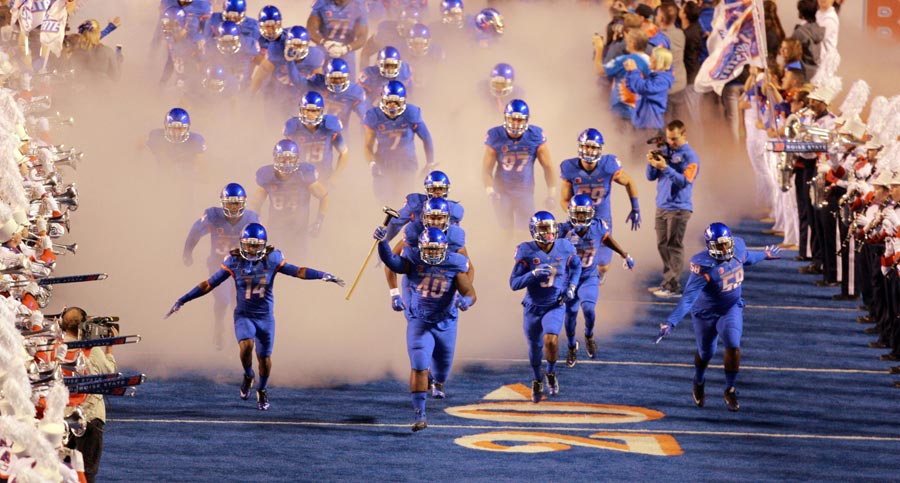 Bart Doan: Such is the price of Boise State’s record-setting success through the first 10 years of the decade when a few years without a conference title has people worried. And while there are probably legit concerns — especially with the fact that this year’s team will have to replace a boatload of talent on the offensive side, never fear, Boise State will be just fine.

They’ve posted top recruiting classes in the conference every year that Bryan Harsin has been at the helm, and in the end, it’s the talent grab that always is key in college sports. BSU shows no signs of falling off. There are other factors that have contributed to this “drought.” For one, Chris Petersen’s Broncos won “only” one conference championship his three years the program was in the Mountain West. The step up in conference was naturally going to contribute to somewhat of a fall off from the heydays of thumping everyone through unbeaten regular seasons.

Harsin is a good coach with a passion for the program, and that’ll only help going forward. Will we see a 50-3 record over a four-year span as we once did for BSU? That’s likely not going to happen with the step up in conference, but make no mistake about it, BSU is still the class of the Mountain West and recruits are still treating it as such. Additionally, whereas other programs in the MWC look more like stepping stone jobs to Power 5 gigs, Harsin bleeds the program’s blue and likely will not be looking to leave, possibly ever. That consistency will only help BSU be as strong as it can.

The MWC championship still will go through the blue turf more than any other route, and on some special occasions, we will still see the Broncos have those years where they make the CFB Playoff committee nail-chewing nervous in late November as they sit around in a smoke filled room holding hands and praying BSU gets taken out of the equation by some upset minded conference foe.

Phil Harrison: I don’t know how anyone is going to duplicate what Chris Petersen did at Boise State. He won at a clip that very, very few did (like counting on half of one hand) because of a bunch of things coming together. For starters, the Big West was a little easier to dominate than the current state of the Mountain West. Let’s not forget that Petersen led Boise to a Mountain West title only once in three tries before leaving for Washington. That step up in competition makes running the table (or close to it) much harder for Harsin.

The gimmicky style of Boise has also worn off. The blue turf at Albertsons Stadium is old news now, and being the program that likes to rail against the conventional has also lost its luster. Then, there was the slap on the wrist for Boise’s athletic department from the NCAA in 2011 for “lack of institutional control.” That also had, and will continue to have a bit of a bearing on recruiting leading up and through the Mountain West expedition.

That being said, people forget that Boise was a very good program before Petersen. Dan Hawkins had already begun building something with a 53-11 record from 2001-2005. Petersen took that momentum and ratcheted it up a bit, but that goes to show you how much easier it was to win in that not too distant past than now.

But look, Boise is still a very good program and will win more Mountain West Conference titles down the line. It’ll continue to make a play at a New Year’s Six bowl often. Just not as often as under the guy wearing the headset in Seattle. Almost nobody would. Especially given the differing circumstances each had to coach under.