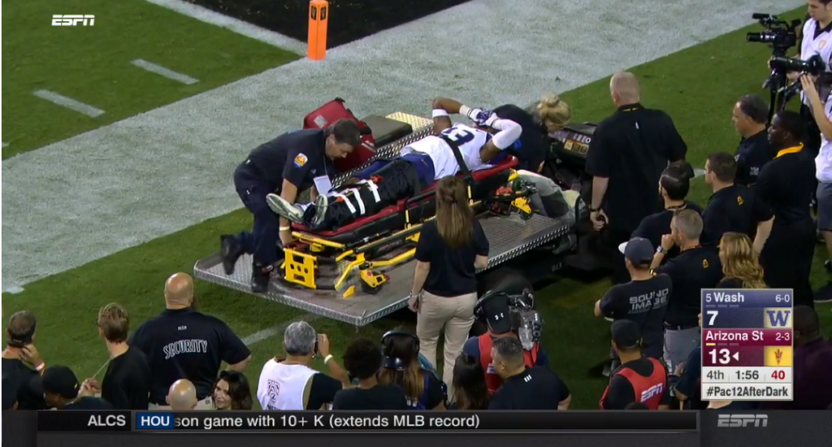 The Arizona State Sun Devils became the latest team in Week 7 to knock off a top-10 team with a 13-7 victory over No. 5 Washington on Saturday night in Tempe. It’s a massive win for the Arizona State program, though a chant from the crowd would lead you to believe the Sun Devils simply beat a not-so-great team.

Yes, the absolutely terrible “overrated” chant broke out at Sun Devil Stadium as ASU was running out the clock in the final two minutes.

Usually when it comes to this chant, it’s not that it’s classless that makes me thinks it’s an awful chant as much as it’s you basically saying your team isn’t very good either. If you’re telling us that the other team is overrated, what does that make your own team? If you beat an overrated team, why is the win very important? When you really think about it, it’s as much of a self-own as it is taunting the other side.

But in the case of the “overrated” chant from ASU on Friday night, the worst part was definitely how classless it was.

With about two minutes left in the game, Washington cornerback Jordan Miller suffered a gruesome leg injury. ESPN play-by-play man Dave Pasch even said the injury looked so bad that they would only show one replay angle.

An aircast had to be put on Miller’s leg and he was carted off the field on a stretcher. And, during this, the “overrated” chant broke out.

This is a really, really bad look.

Even if the ASU students were unaware of just how bad the injury was, everyone in attendance was aware of the injury delay and a guy being carted off. If you really want to do this dumb chant devaluing your own win, fine, but at least wait until a player that suffered a serious injury is taken away from the field.

After seeing the “overrated” chant live on television, I Twitter searched about it and was (pleasantly) surprised to see how many people had similar thoughts.

ASU fans chanting "overrated" as Jordan Miller is placed on a stretcher is completely classless smh.

ASU: Maybe save the overrated chant until the injured guy on the cart leaves the field.

Maybe not chant overrated while a guy with a shattered foot is still on the field for your opponent.

Its not the most classy thing to start the "Overrated" chant while a player on the opposing team is being wheeled out, Arizona State.

Arizona State fans chant ‘OVERRATED’ at Washington as a Washington player gets carted off with an air cast on his leg. Not the best look.

Ok, Arizona State fans, how about you don’t chant “overrated” while a guy is being carted off the field

Not a particularly classy time for ASU fans to be cheering "overrated."

….. probably not the time to chant overrated there, ASU guys

And ASU's student section starts with THE STUPIDEST CHANT IN SPORTS. Stop calling them overrated and appreciate your team, fools.

Hey ASU Student section, maybe now isn’t a good time to be chanting overrated when someone is getting carted off the field???????

Yes University if Washington is overrated, but this might be the wrong time to be chanting that shit lol

Guy from Washington being carted off with a busted leg, 2 min left in 13-7 game and some ASU fans chanting "overrated." Stay classy.

Future reference ASU fans. Don't chant "overrated" when an opposing player is being taken away on a stretcher #stayclassy