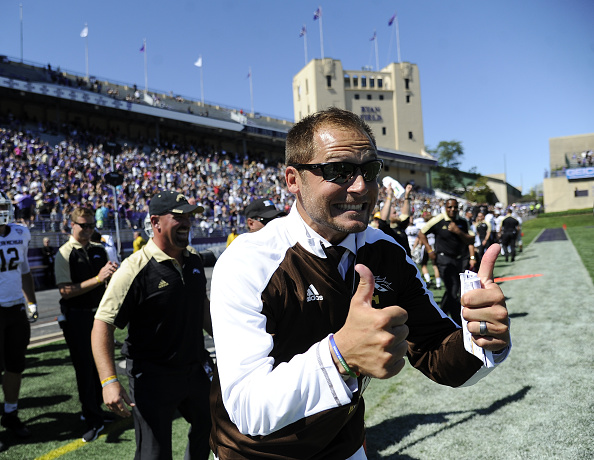 In this week’s Top 25 rankings, there have been a number of unusual sightings. Washington is in the Top 5 for the first time in years. Same with Miami in the Top 10. COLORADO is even ranked again. But the strangest sight of all: the Western Michigan Broncos of P.J. Fleck.

Western Michigan comes in ranked 25th in this week’s coaches poll after their 5-0 start. It is their first-ever national ranking in school history.

The Western Michigan football team earned its first ranking in program history, as the Broncos are now No. 25 in the USA Today Amway Coaches Poll. The Broncos earned the ranking after becoming 5-0 following its 49-10 victory over rival Central Michigan on Saturday in the Battle for the Cannon.

Western Michigan’s 5-0 start is the best in program history since 1994, when the team also started 5-0. The start includes wins over B1G teams Northwestern and Illinois, giving the Broncos two wins over Power 5 schools for the first time in team history. It is also just the fourth time in Mid-American Conference history a school has beaten two B1G opponents in the same season.

Any time you can accomplish “first in program history” items through just five games of the season, like the victories over Northwestern and Illinois produced, that’s a pretty good statement for the direction of your program. At this point, the Broncos and North Dakota State would probably make the Big Ten West division a bit more competitive than the likes of Purdue and Illinois. In their highly anticipated rivalry game against Central Michigan this weekend, Fleck’s Broncos smashed them by a 49-10 final score.

The Broncos can owe their program turnaround to their fiery, energetic, young coach. At just 35 years of age, P.J. Fleck has turned Western Michigan into one of the top programs in the MAC. In the 13 seasons this millennium before Fleck, WMU managed only three eight-win seasons. Fleck is already well on his way to his third eight-win season in just four campaigns in charge. His 5-0 record this season has lifted his overall mark to 22-21, which is pretty impressive considering the Broncos went 1-11 in his first season. He also brought the program its first-ever bowl victory in last year’s Bahamas Bowl and has had the top recruiting class in the MAC for the last three seasons.

What’s special about Fleck and the Broncos goes beyond the results to the enthusiasm he’s brought to the program. Fleck might be one of the most colorful coaches in all of college athletics. From his unique “Row the Boat” mantra to his insane dance moves to his willingness to stand up to in-state powers like Michigan and Michigan State, Fleck isn’t treating WMU like a Group of Five afterthought. And maybe most importantly, in a world populated by the likes of Bobby Petrino and Art Briles, Fleck has shown an all-too-rare sense of integrity in building the WMU program. Before the season, Fleck dismissed two players who were arrested and took responsibility on his own shoulders.

Alas, in the haves-and-have-nots world of college football, the unfortunate reality is that a school like Western Michigan can likely only enjoy a coach like Fleck for a certain, limited period of time. Urban Meyer didn’t stay at Bowling Green and Brian Kelly didn’t become a Central Michigan lifer. A coach like Fleck can bring a flash of joy, enthusiasm, and success to a program like WMU, but it’s fleeting. Ultimately, if that coach does move on to greener pastures, it only becomes an impressive bullet point on a resume and the program is left to start over again.

This season, the number of high-profile, top-flight college football head coaching jobs could be unparalleled. Several Top 15 jobs could come available like USC, Texas, LSU, Auburn, and Oregon. Other Power Five openings could come up at Boston College, Purdue, Kentucky, Georgia Tech and elsewhere. Most all of those seats are already warm, if not already beginning to burn up.

It would be short-sighted for any of these schools to overlook Fleck, who may evolve into the hottest head-coaching candidate next to Tom Herman this season. Imagine what someone with Fleck’s energy could do to resuscitate a slumbering giant like USC or Texas. Imagine what he could do to bring a Power Five school like Kentucky or Purdue into the national conversation.

It would be a significant jump from Western Michigan to one of those programs, but Fleck’s inner self-belief is infectious. Maybe it’s difficult to see someone making the jump from the Broncos to the Longhorns or the Trojans, but at this point, what do those programs have to lose with the rest of the college football world passing it by? Fleck might not just be the answer for the present, but the future as well. After all, if Fleck can do it at Western Michigan, he can do it anywhere.