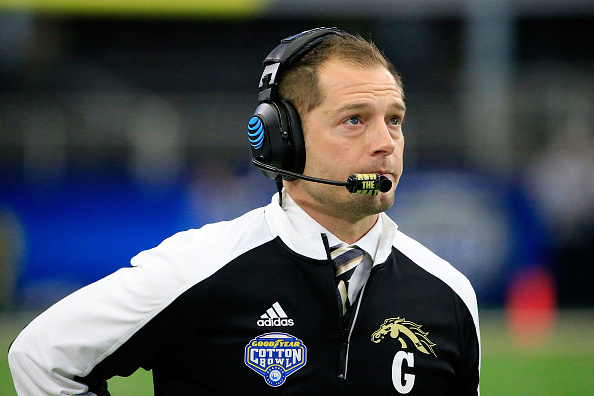 Welp, so much for that Les Miles to Minnesota talk from a couple hours ago.

Minneapolis’ Fox 9 reports that the Gophers have a tentative agreement with Western Michigan’s P.J. Fleck to be the next head coach. The deal will reportedly be for six years, and pay Fleck $21 million:

PJ Fleck is expected to be named the next head coach of the University of Minnesota Golden Gophers football program, multiple sources tell Fox 9.

Two sources close to the situation say that Fleck has tentatively agreed to a deal tonight that will be in the neighborhood of six years and will pay him $21 million.  Another source says a press conference announcing the decision is expected to be held Friday afternoon at TCF Bank Stadium.

The 36-year-old Fleck did an unbelievable job with Western Michigan, leading the MAC school to a 13-1 record, a No. 15 College Football Playoff ranking, and a Cotton Bowl berth in 2016. It was an incredible rise for a program that went 1-11 in Fleck’s first season, 2013.

Fleck has been a very hot name on the coaching market and figured to have his choice of several jobs, but a Big Ten program in Minnesota that went 9-4 this season would certainly figure to be an appealing job.

Then again, it’s a program that recently had 10 players suspended over an alleged sexual assault, and a program that has players furious with administration over the firing of Tracy Claeys as head coach. One Gophers underclassman was even quoted as saying that “countless [Minnesota players] will transfer if possible”, regardless of the new coach:

Fleck and his “Row the boat” motto have made him an extremely popular coach with the players at Western Michigan, so it will be interesting to see if he can keep these Gophers players from transferring.

Another person that has been vocal in displeasure over the firing of Claeys is former Minnesota coach Jerry Kill:

“I will never step foot in TCF Bank Stadium or the football facility ever again,” Kill said on 1500 ESPN Twin Cities, according to Phil Mackey, a host on the station.

Fleck actually worked under Kill as an assistant with Northern Illinois in 2008-09.

We’ll update this post if any additional details become available on the Fleck to Minnesota news.

UPDATE- ESPN’s Bruce Feldman is dropping a bucket of cold water on this report:

Source tells @FoxSports that there is no deal in place between #Minnesota & #WMU's PJ Fleck.