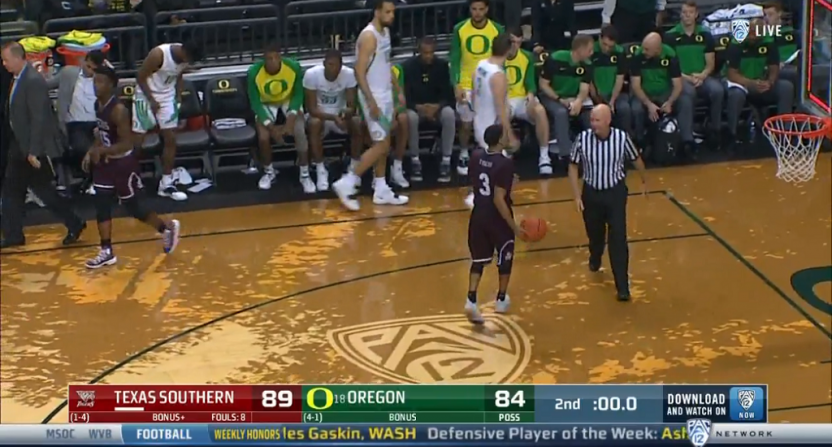 We need to talk about the Pac-12. You might remember this league. The “conference of champions” is having a difficult time.

The Pac-12 has been shut out from the College Football Playoffs for two straight years. In college basketball, it might not have a serious NCAA championship contender for the second straight year. Yes, the Pac-12 can boast than Oregon reached the 2016 Final Four, but the league hasn’t won a national championship in over two decades (Arizona in 1997).

This is all unfortunate news for a conference that already has a lot of questions about the leadership of Pac 12 commissioner Larry Scott. According to The Oregonian, the league is spending lavishly but is falling behind other leagues in revenues.

That might be easier to justify if not for the lousy on-the-field and on-the-court results. Look at what’s happened in basketball.

The Pac-12 had only three 2018 NCAA Tournament teams and all of them lost their opening games, highlighted by UCLA’s embarrassing play-in game defeat to St. Bonaventure. It could be more of the same in 2019. This season, the league is off to a slow non-conference start and it’s having trouble paying its own officials.

The Pac-12 has only one representative — No. 20 Arizona State — in the Associated Press poll. The conference’s biggest marquee victory is Arizona State defeating then No. 15 Mississippi State. Its best quality loss was Washington’s 81-79 decision at Gonzaga. Heck, the two best teams out west aren’t Pac-12 members: No. 4 Gonzaga and No. 7 Nevada.

Among the six major basketball leagues (the Power 5 plus the Big East), the Pac-12 ranks dead last in the Sagarin Ratings. The Oregonian reported that entering this week, the Pac-12’s record against the top 100 in the NCAA Net rankings is 11-28. According to Jeff Eisenberg of Yahoo! Sports, the league also entered this week 3-15 against the kenpom.com top 50.

How is it possible that the #PAC12 is this bad at football and basketball at the same time? Certainly not making anybody outside the west coast must have the PAC-12 network. https://t.co/YeuMHfpGzd

Kenpom.com has four Pac-12 schools among his top 50, none higher than No. 31 Oregon. If things don’t turn around soon, the league might struggle to get more than two teams in the NCAA tournament. As of this week, ESPN’s Joe Lunardi has four Pac-12 teams in: Arizona State, Oregon, and UCLA. A soft bubble — like last year — could help. Still, it wouldn’t be surprising to see the conference fail to get past the tournament’s first weekend yet again.

How did we get here? Wasn’t the Pac-12 supposed to be better?

In the preseason AP poll, the Pac-12 was represented by No. 14 Oregon, No. 21 UCLA, and No. 25 Washington. Those teams have combined for eight losses already. Oregon, despite having the immensely talented Bol Bol, lost at home to Texas Southern as a 25-point favorite. UCLA needed a last-second shot to beat a mediocre Notre Dame team. Washington barely squeezed by San Diego and UC Santa Barbara. Get ready to hide your eyes because look what else has happened in the Pac-12.

The conference desperately needs marque programs to rise to the top. UCLA’s losses are against Michigan State and North Carolina. The problem is the Bruins haven’t beaten anyone of note. They will have a golden opportunity at Ohio State. Coach Steve Alford is perpetually coaching for his job and perhaps his team can be a contender in a weak conference. UCLA might have the Pac-12’s most talented roster. Sophomore guard Kris Wilkes is a consistent scoring threat and has already made one of the most memorable game-winning shots of the year.

Right now, Arizona State is the Pac-12’s premiere team. But even the Sun Devils — ranked No.43 by kenpom.com — need some more key victories. They have a three-game stretch coming up at Georgia, at Vanderbilt, and at home against top-ranked Kansas on Dec. 22. The Sun Devils stunned Kansas 95-85 last year. Another victory over the championship-contending Jayhawks would significantly help. That could help change perception of the conference.

But do you really trust Arizona State? Remember, they rolled out to a 12-0 record last year before collapsing, finishing 8-10 in the league. They lost in the NCAA Tournament play-in game 60-56 to Syracuse. This year, questions about the Sun Devils resurfaced after squandering a 12-point halftime lead to Nevada.

Other games this weekend could help the Pac-12 out: Utah at Kentucky, and USC against Oklahoma. But there’s a strong chance that the league doesn’t pick up any more quality non-conference wins. That will really hurt when conference play starts.

In the Big Ten or ACC, you can rally from a slow start. Those leagues are packed with good teams. Lunardi has 10 Big Ten programs and eight out of the ACC making the NCAA tournament. Those schools have several chances to pick up impressive in-conference victories. The Pac-12 will have few opportunities. Look at last year: the Pac-12 had seven teams with double-digit conference wins. Among those, just Arizona (27-8, 14-4) and UCLA (21-12, 11-7) reached the tournament. Arizona State (20-12, 8-10) only got in on the strength of its upset of Kansas. There’s a strong chance this scenario could repeat itself.

Maybe the Pac-12 can rebound, but it’s already running out of time.