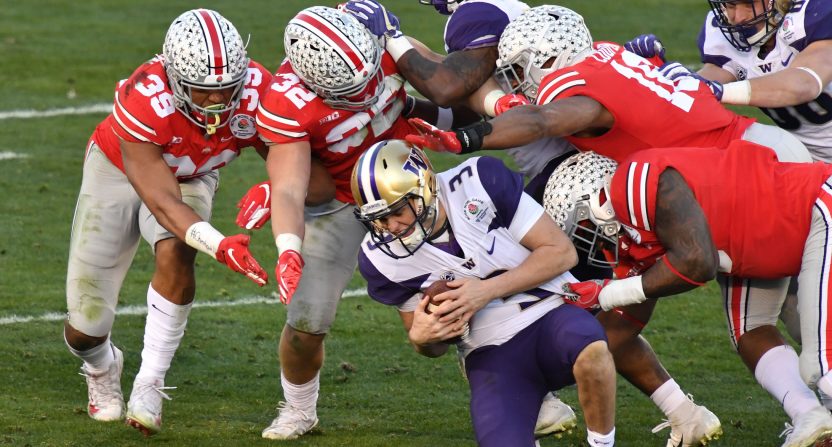 No conference had as bad of a bowl season as the Pac-12 did in the 2017-2018 season. The Conference of Champions managed to win just one of nine bowl games and was left out of the College Football Playoff. Its champion, USC, was dominated by the Big Ten champion Ohio State in a southwestern style Rose Bowl that was forced to relocate to the Cotton Bowl, and the Washington Huskies were taken down in the Fiesta Bowl by Penn State. The rest of the conference came up incredibly small as well with historically the worst bowl season by a power conference. This past bowl season was… better, but still lacked the kinds of results that should leave anyone feeling good about the Pac-12 heading into 2019.

A year after winning just one bowl game and taking home the worst bowl record by a power conference in years, the Pac-12 improved its win total by two for a total of three wins. Washington State, after being snubbed by the College Football Playoff selection committee and ranked too low to qualify for a spot in a New Year’s Six Bowl, took care of business with a good battle against Iowa State in a matchup of ranked opponents in the Alamo Bowl. There was no letdown for the Cougars when they would have had every right to play that card the way Georgia did with their loss to Texas in the Sugar Bowl. Mike Leach and Gardner Minshew were deserving of a chance to play in the Fiesta Bowl, but they didn’t let that distract them from their matchup with a very good Cyclones team in San Antonio.

Two other Pac-12 North programs, Stanford and Oregon, won defensive battles against Pittsburgh and Michigan State, respectively, in their bowl games. Neither the Sun Bowl nor the Redbox Bowl will go down as instant classics, and both Stanford and Oregon were outgained by the opposition in each, yet they found ways to win in ugly fashion. Given where the Pac-12 was a year ago, the conference will take whatever it can get this bowl season.

The Pac-12 still came up with a losing record in the bowl season. After going 3-4 in bowl games this season, anchored by a 1-2 mark against the Big Ten with both conference championship game participants losing to their Big Ten championship game counterparts. Washington lost in the Rose Bowl against Ohio State as Chris Petersen continues to look for his first major bowl victory with the Huskies after losing each of the past three years in the Peach Bowl (College Football Playoff against Alabama), Fiesta Bowl (vs. Penn State) and this year in the Rose Bowl against the Buckeyes.

Utah also came up small in the Holiday Bowl by blowing a 20-3 lead at halftime in a 31-20 loss to Northwestern. Arizona State surprised some just by making a bowl game this season in the firsts season under Herm Edwards, but the Sun Devils suffered a loss against a good Fresno State team in the only Pac-12 bowl game against a non-power conference.

The Pac-12 has now gone three consecutive seasons without a winning bowl record, and the conference has a combined record of 4-12 over the past two seasons. While there was a marginal improvement in the bowl season in terms of wins, the quality of the play around the conference still leaves plenty of room for improvement overall in the bowl season.

The Cheez-It Bowl offered something so grotesque and unwatchable that it became impossible not to watch. Of all the bowl games to be played this bowl season, the Cheez-It Bowl is the one fans will carry a badge of honor for having watched until the painful end, with TCU clipping California in overtime by a score of 10-7. Cal scored a touchdown in the first quarter and never put a dent on the board for the rest of the night. The teams combined for nine interceptions, the same number of third-down conversions the Golden Bears and Horned Frogs combined for in the game. Plus, the fact Cal lost to a bad TCU team is beyond frustrating to see, because TCU was a team sliding in the wrong direction ever since losing to Ohio State earlier in the regular season. Cal should’ve won this game and they couldn’t help but throw it away.

Losing the most hilariously bad bowl game of the year is the ultimate low point for the Pac-12 this bowl season, even if Cal seemed to be heading in a positive direction this season.

The 2019 season is already serving up some interesting stories worth following around the conference. Oregon getting Justin Herbert back for another season will be important, especially at a time when the Ducks are pulling in one of the best recruiting classes in the conference. Mario Cristobal could have the Ducks ready to make a serious run for the conference championship once again. Washington will have some key players to replace, but they will have Jacob Eason eligible to play after losing Jake Browning to graduation at quarterback. That could be pivotal for Chris Petersen, and a battle between Washington and Oregon could once again prove to be one that tips the scales in the Pac-12 in the winner’s favor. Oregon will also open the 2019 season in Arlington with a game against Auburn, which will be billed as a rematch of the 2011 BCS National Championship even though that would be silly.

USC will look to bounce back with Kliff Kingsbury at offensive coordinator looking to provide some juice to the offense, while Chip Kelly and UCLA look to carry over momentum from a better second half of the season to the offseason. But next year could be another tough year for college football in Los Angeles. USC’s September could be brutal with Fresno State, Stanford, and Utah all at home with a road trip to BYU in the mix all before closing out the first month of the season on the road at Washington.