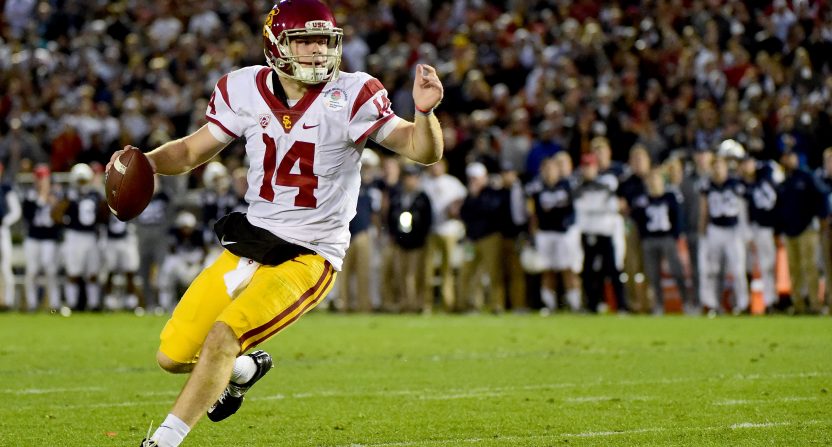 For those of you who didn’t get to see enough explosions on the 4th of July, don’t worry. This week, we’re talking about the Pac-12, which is known producing plenty of offensive fireworks. Today, I’ll kick off our position previews by taking a look at the league’s quarterbacks.

Q. Who are the top returning quarterbacks in the league?

3. Luke Falk, Washington State – As I was typing his name, he managed to throw for 200 yards. All kidding aside, Falk has been the most productive passer in the nation over the past two years. He led the country in passing yards per game in 2015 and ranked fourth in that category last season. Even though he throws the ball more often than other signal callers, Falk completed 70% of his passes and only threw 11 interceptions despite averaging almost 50 attempts per game. Expect him to throw for 4,000 yards again this season and to have the Cougars in contention for the Pac-12 North title.

2. Jake Browning, Washington – Simply put: Browning was one of the best quarterbacks in the country last year. He ranked second nationally in touchdown passes (43) and 11th in yards per attempt (8.8). He did a great job of getting the Huskies offense going right out of the gates, completing 72 of 112 passes for 1,204 yards and an impressive 16/1 TD-to-INT ratio in the first quarter last year. As a result of these stellar numbers, Browning won the Pac-12 Offensive Player of the Year award last season. With seven starters returning from last year’s squad, he could easily do that again in 2017.

1. Sam Darnold – Many think Darnold is the best quarterback in the nation this year. He definitely made his case after taking over as the starter in game four last season, throwing for 3,086 yards and 31 touchdowns, while ranking ninth nationally in completion percentage (67.2%). However, there’s more to Darnold than just numbers; he’s the type of leader that makes everyone around him better. After struggling in the first three games of the season, USC averaged 523.3 yards per game, 6.88 yards per play, and 38.6 points per game with Darnold as the starting quarterback. Those numbers speak volumes about how good he really is.

Q. Which quarterback will have a breakout season in 2017?

I’ll go with Steven Montez at Colorado. He had a strong season as the backup quarterback for the Buffaloes last year, throwing for 1,078 yards, while completing 59.3% of his passes. He played exceptionally well in the three games he started, completing 67 of 99 passes for 823 yards and seven touchdowns. Considering that he posted these numbers despite playing two of these three contests on the road, there’s no question that Montez has what it takes to be a great quarterback in the league. Look for him to have a big season.

Q. Who is a newcomer to keep an eye on in the Pac-12 this season?

The newcomer that I’m keeping an eye on is Oregon State quarterback Jake Luton. Yes, he still has to beat out Marcus McMaryion and Darell Garretson for the starting job, but I think he’ll ultimately win the job. He posted some monster numbers at Ventura College last year, throwing for 3,551 yards and 40 TDs last year. He also had his moments as a redshirt freshman at Idaho in 2015, coming off the bench to complete 12 of 16 passes for 144 yards and a touchdown (he added another on the ground) against Auburn. Assuming he wins the job, there’s no reason to think that he won’t post similar numbers for the Beavers this fall.

Q. What is the most intriguing situation at quarterback?

Although the quarterback competition at Oregon State will certainly be worth watching, I’m most intrigued by the situation at Cal. With Davis Webb off to the NFL, Chase Forrest and Ross Bowers battled for the starting job in the spring. Neither player was able to win the job outright, meaning that the duel could possibly continue right up until the season opener (if not longer). It’ll be interesting to see who wins the starting job, and whether the offense will be as productive as it was when Jared Goff and Webb were running the show.