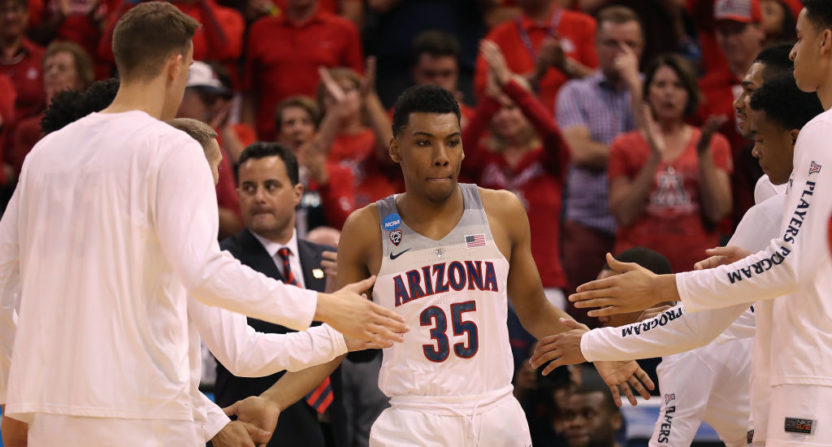 Last season was an awesome one for the Pac-12. Three different teams spent time in the top five, and each of the four teams who made the NCAA Tournament won at least two games. To cap it all off, Washington’s Markelle Fultz and UCLA’s Lonzo Ball were the top two picks in the NBA Draft.

Entering 2017-18, it’s unfortunate that the ongoing FBI investigation hangs over Arizona and USC, the league’s two main contenders. But if you can just nudge all those allegations of corruption to the side, you’ll find a potentially epic title race brewing in a league that could send at least half its teams to the NCAA Tournament.

Miller has produced great team after great team at Arizona, but he’s yet to reach the Final Four. Last year, the Wildcats bowed out to Xavier in the Sweet 16. But despite losing a key senior and three players to the pros, Arizona has a legitimate claim to be the preseason national title favorite.

According to KenPom’s preseason projections, the Wildcats have the best chance of anyone to finish the regular season undefeated at 1.3 percent. Between junior guard Allonzo Trier and freshman forward DeAndre Ayton, Arizona has the Pac-12’s two best players.

If there’s one thing that’s going to derail ‘Zona, it’s the FBI investigation, which has already cost them a five-star recruit. Who knows if or when the program will face repercussions for allegedly bribing a recruit, but the ongoing investigation will be a distraction all season.

Can Oregon get back to the NCAA Tournament?

Oregon lost, well, basically everyone whose name you knew from last year’s Final Four squad. Sophomore point guard Payton Pritchard is the only member of the rotation who’s back. But Dana Altman has reloaded with a slew of transfers that, with the right chemistry, should get the Ducks back into the NCAA Tournament.

New Mexico graduate transfer Elijah Brown is eligible after averaging 18.9 points last season for the Lobos. Illinois State graduate transfer MiKyle McIntosh was in the MVC Player of the Year conversation until a knee injury forced him to miss six games. And 6’9″ forward Paul White averaged five points as a freshman for Georgetown back when the Hoyas were actually good. That veteran group along with five-star wing Troy Brown, four-star guard Victory Bailey Jr. and a pass-first point guard like Pritchard can make Oregon a very formidable team in 2017-18.

For what it’s worth, Ken Pomeroy analyzed second-half coaching performances and found that Dana Altman is the best active coach in crunch time. Pomeroy himself explained that his formula isn’t a predictive measure, but Altman’s tactical success should make Ducks fans a little more comfortable.

UCLA reloaded as well with a monster freshman class

Like Oregon, UCLA lost a boatload of production from last year’s top 20 team. The Bruins lost Lonzo Ball, T.J. Leaf and Ike Anigbogu to early entry while Bryce Alford and Isaac Hamilton graduated. That leaves Steve Alford with junior point guard Aaron Holliday and senior center Thomas Welsh. That’s not a bad place to start, but once again UCLA will be relying heavily on freshmen to fill out the rotation.

the disrespect to Liangelo Ball is something else ? pic.twitter.com/5DGXs8dHUK

A key for UCLA will be getting quality minutes out of 6’11” senior G.G. Goloman and 6’3″ sophomore Prince Ali, who averaged 3.9 points as a freshman but redshirted last season due to a torn meniscus.

Oregon State will bounce back in a big way

Oregon State was, quite simply, one of the worst teams in college basketball last season. The Beavers won just four games against Division I teams, all at home. Three of them were against Prairie View A&M, UTSA and Kent State. But let’s be kind. OSU’s fourth-youngest roster in the nation only got younger and less talented when star sophomore Tres Tinkle broke his wrist Thanksgiving weekend.

With Tinkle healthy and everyone else back — juniors Stephen Thompson Jr. and Drew Eubanks are two other guys to watch for –Oregon State could wind up being the most improved team in the country. Will OSU return to the NCAA Tournament? They’re shaping up as a bubble team in preseason projections. But even if the Beavers have to settle for the NIT, that would be a good laughing pad for a team with no senior starters.

Pac-12 Preseason Player of the Year