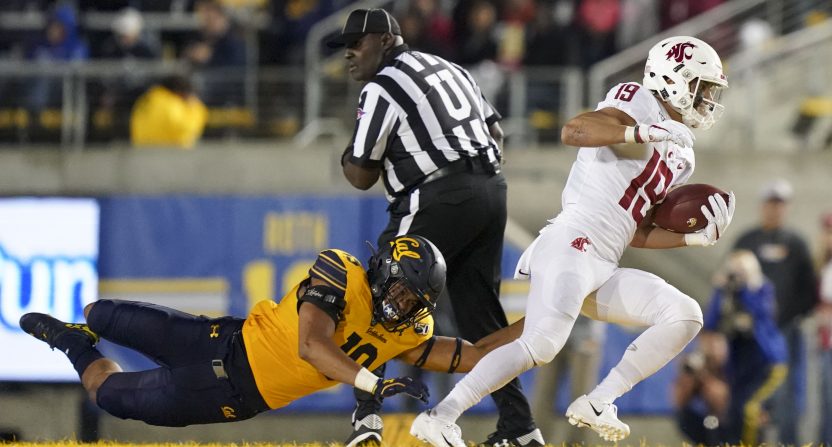 Things are not going great in Pullman as Mike Leach’s Washington State team fell to 4-5 this past weekend following a loss to the Cal Bears. He even reportedly referred to his players as “frauds” in a post-game locker room rant.

He might have wanted to focus that kind of talk for the Pac-12 referees who worked the game as they apparently pulled a gaffe that probably had an impact on the final score.

Pac-12 admits refs screwed up in Cal-WSU game – a "mechanical error" – assessed penalty against WSU that should have been against Cal pic.twitter.com/P2Es6UoYQI

The conference released a statement on Sunday acknowledging a “mechanics error” in the third quarter. In layman’s terms, the refs called a penalty on Washington State that should have been assessed to Cal.

With 10:14 remaining in the third quarter, Washington State received the kick off and returned it to the 50-yard line. The Referee threw a flag on the play for a hands to the face penalty. After a crew discussion, the foul was announced by the Referee as “hands to the face on the receiving team number 15” and Washington State was penalized half the distance to the goal from the spot of the foul and the ball was placed at its own 8-yard line.

After the next play was run, the Referee informed Washington State that there was an error in application of the penalty. The penalty was on the kicking team number 15, not the receiving team, and the penalty should have been assessed on California at the end of the play with the ball spotted at California’s 35-yard line.

The Conference confirmed the penalty for hands to the face was correct. However, the mechanics and communication were incorrect in assessing the penalty to Washington State instead of California.

That’s, uh, pretty bad! Even for Pac-12 refs, who already have a fairly subpar reputation. Per the statement, the conference has suspended the referee Matt Richards for one game and the other members of that crew have been downgraded.

The league’s public announcement was made because this error met the criteria laid out by the Pac-12 Conference’s new football officiating communications protocol. The Pac-12 office now issues public statements on calls that meet one or more specific criteria, including “call involving a significant error in officiating mechanics” and “call involving an error in rules interpretation.”

This is the latest in a long line of gaffes that have sullied Pac-12 football games in recent years. Earlier this season, the conference had admitted a referee error in Arizona State’s win over Michigan State and backed a controversial call in the Ole Miss – Cal game.

Ironically, this colossal in-game error comes one weekend after Pac-12 commish Larry Scott did an interview in which he said league referees were “pointed in the right direction.”