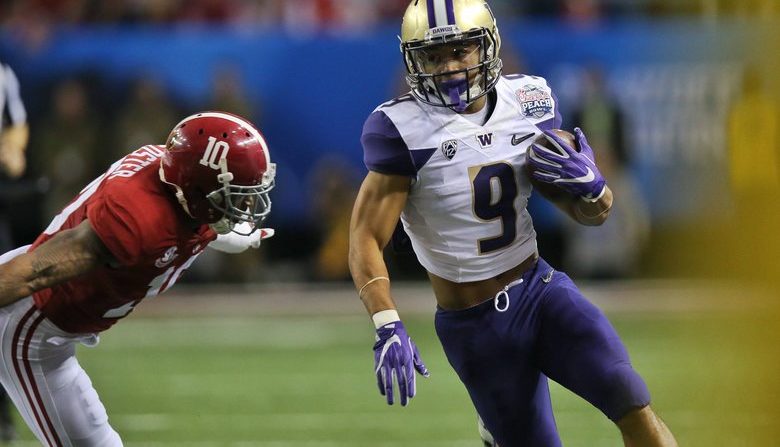 Quarterbacks rule the day in the Pac-12, where pass-happy offenses have been all the rage for decades. It isn’t a passing fad, it is how things are done out West. But that doesn’t mean running the football has been totally abandoned.

In fact, most of the new hires in recent years take the run game very seriously. So do tradition-rich running schools like USC and cross-town rival UCLA. Oh, and some school named Stanford too.

As we head into 2017, are we about to see a rise of the running back across the conference or will the loss of big names mean a trend downward for the running backs of the Pac-12?

Just three returning running backs topped the 1,000-yard mark and Ronald Jones II was one of them, rushing for 1,082 yards. Most impressive? He put up 742 of his 1,082 yards in the final five games of the regular season alone. That promises huge potential for greatness, but it also came against some really bad defenses like Cal, UCLA and Notre Dame as well. Can Jones build off a really good end to his 2016 season? That’s why he is this low in the rankings.

With Christian McCaffrey off to the NFL a year early and Joe Williams graduating from Utah, Gaskin takes the mantle as the best running back in the Pac-12. He also is the returning leading rusher from last season, racking up 1,373 yards. Head coach Chris Peterson loves him some running out of the spread attack, and Gaskin is a perfect example of why the Huskies are considered a heavy favorite to win the Pack-12 North. Don’t be surprised to see him top the 1,500-yard mark after back-to-back 1,300-yard seasons.

If you want to know how the Buffs went from afterthought to contender, look no further than Phillip Lindsay. He rushed for 1,252 yards and 14 touchdowns last season alone. If you’re looking for the best player in the Pac-12, you could do far worse than Lindsay. After all, he has the whole package of speed, strength, and ability to catch passes out of the backfield.

Sonny Dykes loved to throw the football a ton, while the running game was really an afterthought (621 passing attempts to 414 rushing attempts last season). That changes a lot with the hire of Beau Baldwin as offensive coordinator for Justin Wilcox’s first year at the helm of the Cal program. Luckily for Baldwin, he’s got a ready-made star in waiting in Tre Watson. He rushed for 709 yards, averaging 4.9 yards per carry and scoring a team-best four rushing touchdowns. Watson is shifty and explosive, but he can also catch out of the backfield. Given the new coaching situation, I wouldn’t be surprised to see Watson become one of the best backs on the West Coast and in the Pac-12 at the very least.

One might be tempted by the No. 3 running back in the country, Stephen Carr, but USC has this guy named Ronald Jones II working as the featured back in 2017. So let’s go a bit further down the Pac-12 recruiting board and land on four-star Arizona State commit Eno Benjamin.

He’s no slouch in his own right, coming in as the No. 6 ranked running back in the 2017 recruiting class. Benjamin also comes in to an offense that really could use some help in the run game. Seniors Demario Richard and Kalen Ballage basically split carries last season, racking up just over 1,100 yards combined on the ground. Todd Graham’s offense could really use a featured back and Benjamin is just that. But, just how quickly will he see the field and impact the Sun Devils offense? That is the big question heading into fall, but expect him to be a name to watch over the next few years as he’ll get his shot at stardom.

This was an easy choice for me, and we’re talking about the Washington Huskies here. Myles Gaskin is perhaps the most talked about running back on the West Coast this offseason, and we’ve highlighted that already. But what makes the Huskies backfield so intriguing is that there are multiple backs capable of 1,000-yard seasons.

Don’t overlook senior Lavon Coleman, who rushed for just 852 yards and seven touchdowns to complement Gaskin’s explosive sophomore season. He’s a great change of pace for teams to have to deal with, averaging a cool 7.4 yards per carry and picking up nearly 60 yards per game on just a little over eight carries per contest as well. Quarterback Jake Browning also is a threat in short-yardage situations, having scored four touchdowns on the ground last season.

But the depth is certainly there, as Gaskin and Coleman are backed up by junior Jomon Dotson, who rushed for 260 yards as the third back on the depth chart last season. Few teams in the Pac-12 are as deep and proven at the running back position as are the Washington Huskies.