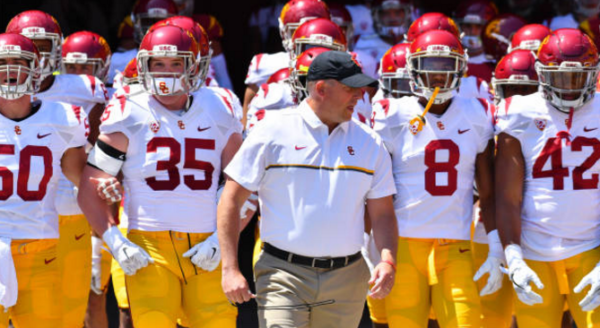 Our college football preview coverage continues with a look at the non-conference games being played by Power 5 teams this fall. This week, it’s the Pac-12.

The Pac-12, like the Big Ten and Big 12, only plays three non-conference games because its teams play nine conference games. The conference has several preseason College Football Playoff contenders, most notably Stanford and USC (though there are a few other dark horses, like Oregon).

Sept. 2, Northern Arizona
I’m okay with one in-state FCS school as long as the rest of the schedule is okay.
Grade: D

Sept. 9, Houston
Kudos to Arizona for having a strong Group of 5 team on the schedule. I wish they had the guts to schedule a P5 team, but you can’t get everything.
Grade: B+

Overall:
No P5 team on the schedule, and no game tougher than Houston at home. This schedule is pretty weak, but after Arizona’s seasons the last two years a weak nonconference schedule (with one pretty challenging game) is probably what the program needs.
Grade: B-

Aug. 31, New Mexico State
The Sun Devils start off the season by hosting one of the worst programs in FBS for a long while now. At least it’s still an FBS program, though.
Grade: D

Sept. 9, San Diego State
This is the first half of a home-and-home. Full props to Arizona State for giving a home-and-home to a top Group of 5 program.
Grade: A-

Overall:
One equal P5 opponent, one top Group of 5 opponent, and one cupcake, but not against an FCS team. I cannot ask for anything more. Great schedule.
Grade: A+

Sept. 1, vs Colorado State (in Denver, CO)
This yearly rivalry is one of my favorites. It’s between a Power 5 and Group of 5 team, but this game has been pretty good for a while now while Colorado State was improved and Colorado was struggling. I don’t know how much longer it will be a good rivalry game, but it’s a good one now.
Grade: A-

Sept. 9, Texas State
The Bobcats have been one of the worst programs in FBS since joining, though any program in Texas has potential if the school invests in a team. Still, this is a total cupcake game for now.
Grade: D

Sept. 16, Northern Colorado
An FCS team on a schedule with no P5s. Not good.
Grade: F

Overall:
The best team on this nonconference slate is a Mountain West team that will be lucky, at best, to finish at third in its division. The Pac 12 South as a whole has the best nonconference schedules in the country, but Colorado is dragging this division way down.
Grade: F

Sept. 3, Texas A&M
This should be one of the better games of the opening weekend, with two potential New Years’ Six dark horses squaring off to open the season. It’s such a good matchup that ESPN is giving it the entire nation as an audience on the Sunday before Labor Day. This should be good.
Grade: A+

Sept. 9, Hawaii
This is a cupcake game, but at least it’s against an FBS team–and one that has potential to not always be a cupcake.
Grade: C-

Sept. 16, @Memphis
UCLA closes its nonconference season by playing a cross-country road game against a good Group of 5 program. I have no idea why this game was scheduled, but I am very happy that it was.
Grade: A+

Overall:
UCLA has no FCS teams on the schedule, a cupcake that’s not always a true cupcake, and two other very good games around that. I don’t know that the Bruins will go more than 1-2 in nonconference play, but full props for scheduling this.
Grade: A+

Sept. 2, Western Michigan
If this was 2016, this game would be very intriguing. Unfortunately, it’s 2017. Western Michigan just lost two of its best offensive players in school history, and USC is expected to be a preseason Top 5 team. Still, definitely not a cupcake game.
Grade: B

Sept. 16, Texas
When this game was scheduled back in 2010, no one could have imagined that it wouldn’t be the biggest non-conference game of the season. Texas hasn’t been Texas since then, but this game should still be a major event for college football fans.
Grade: A

Oct. 21, @Notre Dame
Notre Dame struggled last year, but the Irish are loaded with talent and always a potential Top 25 team. This might be a yearly game, but it’s still a good one that is never a sure win for anyone.
Grade: A-

Overall:
Can I just point out how absolutely ridiculous it is that USC scheduled two all-time great programs, and yet the only team on this schedule that was ranked to end 2016 is Western Michigan? On the flip side, when a team that ended last year ranked is the worst team on a nonconference schedule, you know that the schedule is good. USC should be a Playoff contender, and this schedule will earn the Trojans some serious respect with the committee.
Grade: A+

Aug. 31, North Dakota
It’s an FCS game, but as FCS games go it’s not an atrocious one. This is actually a pretty risky game to schedule.
Grade: D

Sept. 9, @BYU
The Holy War is back. Last year’s game was a doozy, and I expect this year’s game to outdo it. BYU might not quite be a Power 5 program, but it’s far better than most Group of 5 ones.
Grade: A+

Sept. 16, San Jose State
Two years ago, it almost looked like the Spartans were turning the corner as a program. It no longer looks that way. San Jose State isn’t an FCS-level cupcake anymore, but this is still a cupcake game.
Grade: D

Overall:
Utah gets props for scheduling a good FCS team, and the game against BYU is certainly a good one. Still, I’d rather the third game be a much better one. Two cupcakes out of three is too many.
Grade: B-