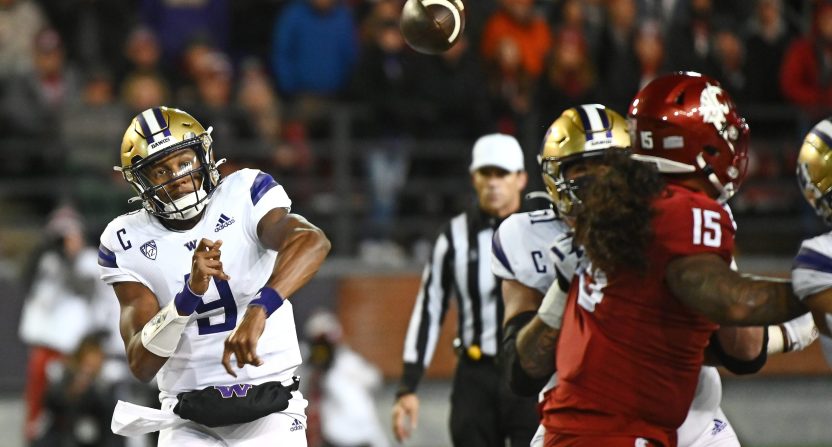 As conference realignment continues to grow within collegiate sports, fewer and fewer in-state rivalries will exist. A legislative bill in Washington will attempt to keep two Pac-12 schools in the same conference moving forward.

A bill proposed on Tuesday will seek to keep the Washington Huskies and the Washington State Cougars in the same conference, potentially keeping this storied rivalry alive if it is ultimately passed.

State Senator Drew MacEwen, who is a proponent of the bill discussed why many believe it is so important for both schools to be in the same conference.

“I think that both of those schools have rich history in this state, and I don’t think that decision should be made without public input via the Legislature,” said MacEwen via Nathan Pilling of the Kitsap Sun. “The intent of that bill is to, one, keep UW and WSU together, so we don’t end up losing one to a different conference and the other one is left in a conference that is dwindling. I think we have every right to do that and make sure that we honor our rich tradition in this state of both those schools.”

While this bill wouldn’t ensure that both teams would remain in the Pac-12, it does mean that any conference interested in bringing in one school would have to bring both if the bill is passed.

Fans of both schools took notice of this proposed bill, and seem to be in favor of it potentially being passed to save this important rivalry.

“Washington is not going anywhere now!” one fan tweeted.

Washington is not going anywhere now!

“Well this is interesting,” another fan wrote.

Well this is interesting https://t.co/oZpRFPNEHO

This is important particularly because the Big Ten had been linked to potentially being interested in having Washington join their conference as an expansion team.

It is unclear at this point how likely this bill is to be passed, but this could be a great thing for the Pac-12, which had been in danger of losing one or both schools to another conference.