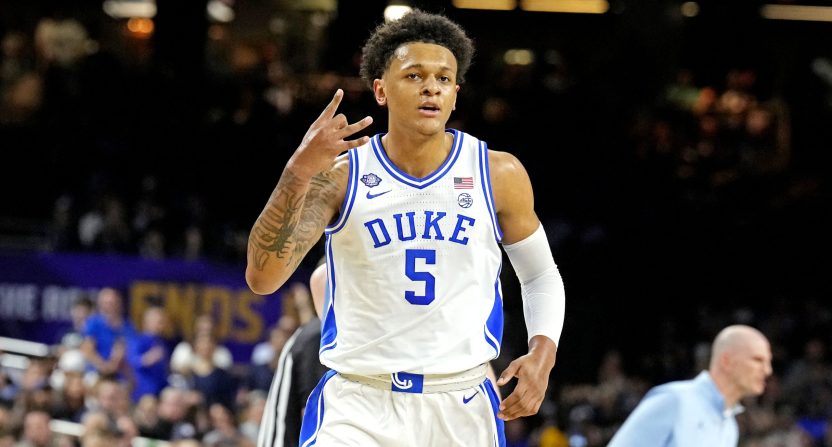 The Duke Blue Devils had an excellent run in the 2021-22 college basketball season surrounded by the looming retirement of longtime head coach Mike Krzyzewski but ultimately fell short to their bitter rival in the Final Four, losing to North Carolina 81-77.

The team was one of the most talented in college basketball, with many expecting numerous players on the roster to declare for the 2022 NBA Draft.

Duke star forward Paolo Banchero was arguably the most talented player on the roster, so it came as no surprise that he officially declared for the NBA Draft on Wednesday.

He posted a video on social media on Wednesday, thanking everyone at Duke for their guidance in getting him to this point in his basketball career.

“What’s up Duke fans, man what a season,” said Banchero. “Playing on some of the biggest stages, in front of you guys the best fans in the world with my brothers. I couldn’t ask for anything more.

“I have so much to be thankful for, first my mom and my dad always being there for me, supporting my dreams growing up. My coaches, Coach Scheyer, C-Well, and Amile (Jefferson), thanks for being there all year and pushing me to be my best.

“Coach K, it was an honor to be a part of your final season. Thank you for pushing me every single day and expecting nothing but the best out of me. Thank you to my teammates, my brothers. You guys made this experience better than I can ever imagine.

This was fairly expected as many view Banchero as a likely future top-three pick in the upcoming NBA Draft.

Duke fans and teammates took the time to reach out to Banchero on social media and thank him for what he has done during his time at the program.

it was an honor brother 🤝 https://t.co/d1v3hfUEQi

We’re thankful for you Paolo! Gonna do big stuff in the league! Thanks for being an absolute joy to watch play this season at Duke! https://t.co/pz6jRXBJLo

One of my favorite players. You can tell he loves Duke. No doubt he'll kill it in the league. Always #TheBrotherhood 😈 https://t.co/Uh4jj9Vona

Given what Banchero was able to show during the 2022 NCAA Tournament, he will certainly be amongst the top picks in the upcoming draft and looks like he could be one of the future stars in the NBA for years to come.