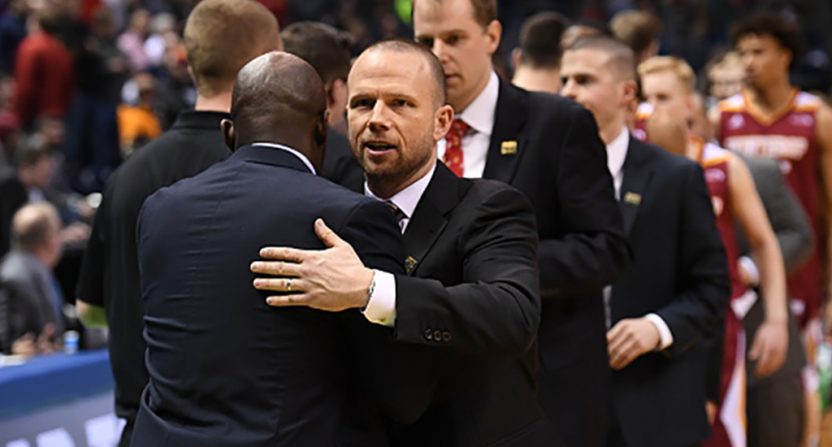 What a day for the coaching carousel. First Georgetown axed John Thompson III after 13 years, and then Winthrop’s Pat Kelsey stranded UMass at the altar. Kelsey cancelled his introductory press conference at the last minute because of a “change of heart,” according to ESPN’s Jeff Goodman.

Winthrop’s Pat Kelsey has had a change of heart and will not take the UMass job, sources told ESPN.

Twitter quickly exploded with rumors that Kelsey may have received a call from Georgetown, or even that he’s anticipating a job opening at Xavier. Kelsey played for the Musketeers in the 1990s and was later their associate head coach. (Current Xavier coach Chris Mack is a rumored candidate for the Indiana opening.)

But Sports Illustrated’s Pete Thamel then reported Kelsey plans to return to Winthrop.

While Kelsey’s decision leaves the UMass administration with its tail between its legs, some of the program’s players have already responded to the situation on Twitter.

Dude said he loved us like his sons.. Riiight ?

Not an easy two weeks for these guys.

First they saw their former coach Derek Kellogg fired March 9 after consecutive losing seasons. Although Kellogg brought the Minutemen to the 2014 NCAA Tournament, there was more optimism with Kelsey coming to town.

Kelsey won back-to-back Big South titles at Winthrop. In what appeared to be his final game there, he took No. 4 seed Butler to the wire in the NCAA Tournament last week.

Reports surfaced on Monday that Kelsey had accepted the job at Massachusetts. He appeared excited for the opportunity based on this tweet.

So excited to be a part of the rich tradition of @UMassBasketball. I may fall over when I meet Dr. J. Can't wait to get to Amherst! #GoUMass

He had already signed the contract, which means he’ll pay a $1 million buyout, according to Matt Vatour of the Daily Hampshire Gazette.

Kelsey has $1 million buyout language in memo of understanding

Kelsey’s last-second spurn recalls memories of Billy Donovan leaving for the NBA the first time in 2007 before returning to Florida.

For mid-major fans, it surely brought to mind when Gregg Marshall was the coach at Winthrop back in 2006. He held his introductory press conference as the next coach of College of Charleston. Like Kelsey, he then doubled back to Winthrop.

The following season, Marshall went on win 29 games and reach the second round of the NCAA Tournament. We’ll see 12 months from now if history repeats itself in that regard, too.