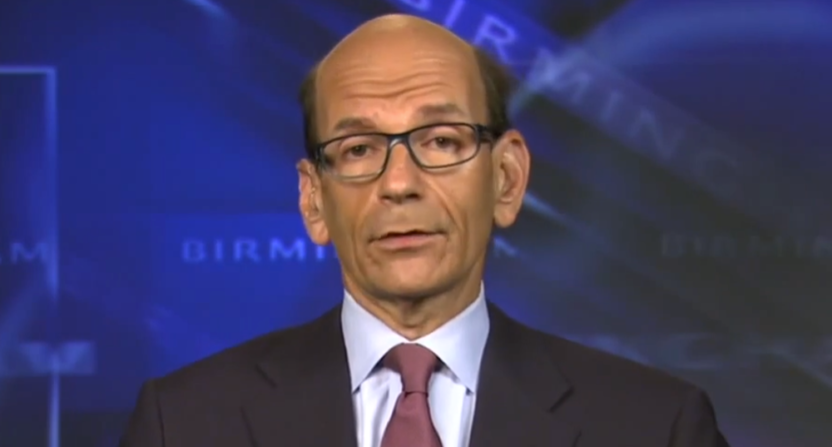 Despite this ridiculous stat, two well-known college football broadcasters think the SEC has fallen from grace.

The first is Paul Finebaum. The 62-year-old is a prominent figure on the SEC Network and ESPN talking about the glory of SEC football. On ESPN’s Mike & Mike Thursday morning, Finebaum didn’t parse his words when he made the bold statement that the SEC is no longer a powerhouse.

Paul Finebaum agrees with critics that the SEC isn't the powerhouse it once was and offers some perspective into why: pic.twitter.com/eiEjIF5E9d

“It’s time to tell the truth down here. The SEC won six straight National Championships and owned college football, but it doesn’t anymore,” Finebaum said. “I think the coaching hires have been very questionable. A lot of recycled coaches, a lot of Nick Saban disciples, some have worked out, some haven’t.”

The other prominent broadcaster to acknowledge the SEC’s fall is Brent Musburger, on our very own Awful Announcing podcast. At 1:06:40, Musburger says the following:

“You know they do a fabulous job and if the one thing they have to work with now, and it’s going to be a little bit difficult for them, the SEC is down,” Musburger stated. “The days of their dominance, that’s long gone right now.”

“You’ve got Alabama and everybody else with what’s going on in the conference,” Musburger added. “It’ll be interesting to watch.”

While this will definitely light a fire under fans all over the southeastern part of the United States, both Finebaum and Musburger may have a point.

Let’s start off by examining how SEC teams have fared out of conference just this year. While the college football season is only a couple of weeks old, most of the SEC schools have played their first couple games out of conference instead of within.

The result? The SEC is tied for the worst out of conference record between the power five conferences. The ACC is 5-7, the Big Ten is 7-5, the Pac 12 is 6-2, and both the BIG 12 and SEC are 4-6. That is abysmal. Here is how the SEC breaks down when they play each of the other four power conferences:

The 0-2 record against both the Big Ten and Pac-12 specifically is pretty bad. Only one other power five conference has a winless record against another power five conference, and that’s the ACC at 0-1 against the Pac 12. Of course, record alone isn’t everything given the vastly differing quality of matchups out there, but to make matters worse for the SEC, some of their out-of-conference losses have been pretty bad.

The SEC as a conference arguably only has one good out-of-conference win so far, but it is a nice one: Alabama over Florida State 24-7. But that speaks to another major point Musburger mentioned: the SEC really is Alabama and everyone else. You know that stat about the SEC being represented in 10 of the last 11 college football title games? Well, it’s been Alabama that has represented the SEC in five of those 10 games. No other school has made it more than twice.

As for the final AP or BCS rankings in the last seven years, Alabama has been the highest-ranked SEC school four of the last seven years and second two of the other three. So what does this tell us? Alabama is in a world of its own inside the conference, and no school has been able to do much to dethrone them on a consistent basis. And even beyond that, other SEC schools aren’t finding as much success against non-conference opponents as they were a few years back. We even ran a roundtable this summer looking at other conferences catching up to the SEC.

At the end of the day, Finebaum and Musburger may be right that the SEC isn’t what it used to be. Except for Alabama, because they are Alabama. But conferences’ relative strengths do change over time, so even if the SEC is down as a whole, it may not be in a permanent valley. The likes of Finebaum and Musburger bashing the current SEC is certainly interesting, though, and is going to create a lot of reaction.