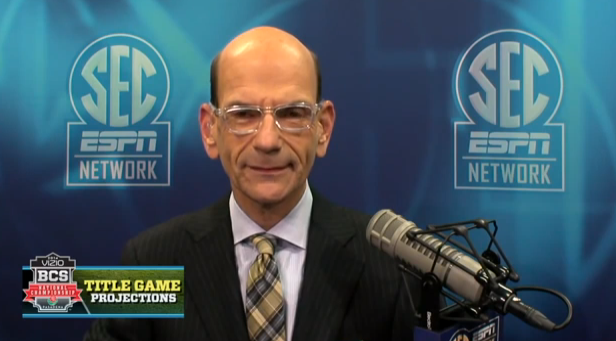 Paul Finebaum has been known to get into some pretty intense back-and-forth arguments with his callers. He had another one of those during Tuesday’s show.

A fan called into Finebaum’s show asking why Michigan wasn’t receiving more praise from the Mouth of the South. Finebaum responded by saying he hadn’t seen enough from the Wolverines yet to judge them. This interaction escalated further and ended with Finebaum throwing some harsh criticism toward the Michigan fanbase.

Here’s how things escalated with Finebaum and the caller:

Finebaum then wondered why the caller was whining about the lack of respect. The fan then said the comparison between Alabama’s Nick Saban and Jim Harbaugh aren’t right because Saban walked into a winning program at Alabama, making the point that Harbaugh started with less.

That’s when Finebaum got annoyed. He immediately jumped in and said Saban didn’t walk into a winning program when he took over in 2007. Finebaum pointed out that the Tide had a .500 season (going into the bowl game) in 2006, fired coach Mike Shula and had a long losing skid to biggest rival Auburn.

“Is there a more pathetic fan base in America than the University of Michigan? What a whiny and sniveling bunch.”

Shots. Fired. If there’s one thing that gets Finebaum going more than anything, it’s when fans call in about a lack of respect. It had to be especially irking given the fact that a fan of a Big 10 team was calling into Finebaum’s show, which mainly focuses on the SEC and is simulcasted on the SEC Network.

But after the intense call, we might have found out that this caller might have been doing some trolling to ol’ Pawwwllll.

But that still doesn’t dispel the fact that Finebaum does not have a great relationship with Michigan and its fans. Earlier this year, former Ohio State running back came on Finebaum’s show, and Finebaum basically baited Elliot into ripping Michigan coach Jim Harbaugh.

Finebaum hasn’t been afraid to go after fans before, and this doesn’t seem any different. But I can’t imagine this will help change the perception of Finebaum for those in Big 10 country. He’ll still be the guy on the network with the SEC bias.