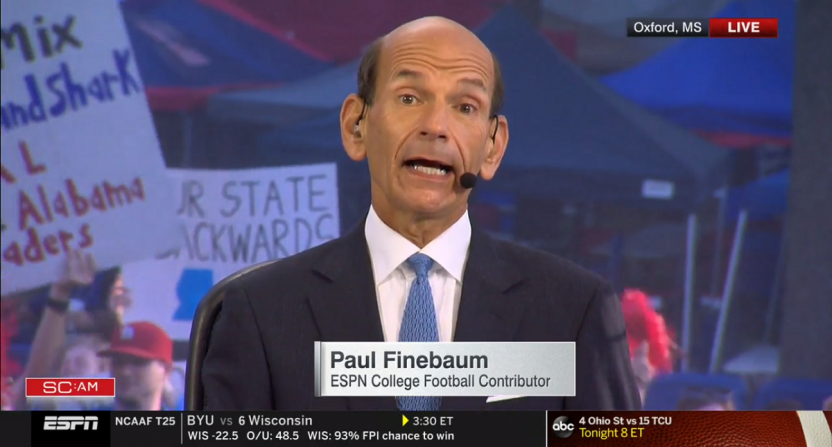 One of three games between ranked opponents today sees #17 Boise State traveling to Stillwater to face #24 Oklahoma State. That matchup has a ton of potential, and as its on ESPN in the 3:30 PM Eastern window, it makes sense that SportsCenter would have Paul Finebaum analyze it this morning as part of the Saturday Selections segment.

At first it feels like maybe Finebaum just forgot to say “State”, but then it quickly becomes apparent that, no, he thought today’s game was a rematch of the legendary 2007 Fiesta Bowl, and prepared an entire quick hit analysis accordingly.

“Give them credit, they’re playing a pretty good schedule with UCLA last week and now Boise…I like everything about this Oklahoma team. I’m worried about losing the running back, Anderson. But Kyler Murray, is he in the Heisman race already?”

@finebaum I hate to point out small details to you, but on @ESPN you just said Oklahoma would beat Boise State. Boise State is at Stillwater to play Oklahoma State. Perhaps you should re-evaluate your prediction.

There you have it. Finebaum says Oklahoma beats Boise #clown#clueless

ESPN “expert” @finebaum picked Kyler Murray and the Oklahoma Sooners to beat @BroncoSportsFB. 😂😂 He May be surprised when the Broncos take care of business today against @okstate in Stillwater! Go Broncos!!