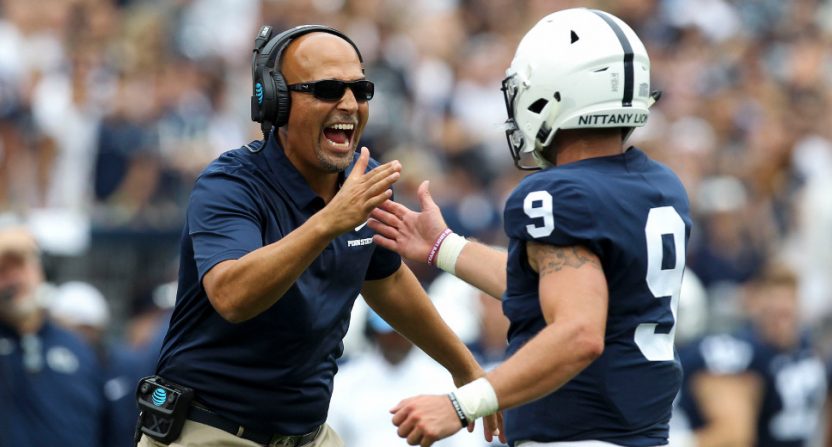 Then-FCS Appalachian State made history 11 years ago with a Sept. 1 road win over the then-No. 5 Michigan Wolverines on Big Ten Network, and they’ve come and they almost repeated the feat against another top-10 ranked Big Ten team Saturday. The Mountaineers, now playing in the Sun Belt at the FBS level, took on No. 10 Penn State on the road Saturday, and they almost came away with a win after starting the fourth quarter with 28 points to the Nittany Lions’ seven.

But Penn State got a game-tying touchdown, App State missed a 56-yard field goal, and the game went to overtime. There, the Nittany Lions scored on their first possession and then picked off the Mountaineers on their own possession. Here’s the game-sealing pick from Penn State senior defensive back Amani Oruwariye, which came just after App State barely converted a fourth-down gamble:

While this didn’t work out for the Mountaineers in the end, they put in another impressive performance, including a remarkable touchdown run from senior RB Jalin Moore Jr. to take the lead inside the final two minutes:

However, Penn State responded with a great drive of their own, and quarterback Trace McSorley (seen above celebrating a first-quarter touchdown with head coach James Franklin) survived the rush and hit freshman receiver K.J. Hamler for the game-tying touchdown in the final minute:

Appalachian State still had the chance to win with a field goal, and made some nice plays to get close to range. However, they were left with a 56-yard distance on fourth and four inside the final 30 seconds, and elected to try the field goal rather than go for it. And kicker Chandler Staton couldn’t make that, sending the game to OT, where Penn State survived thanks to Oruwariye. But the Mountaineers definitely made this interesting, and definitely produced some worries for the Nittany Lions.