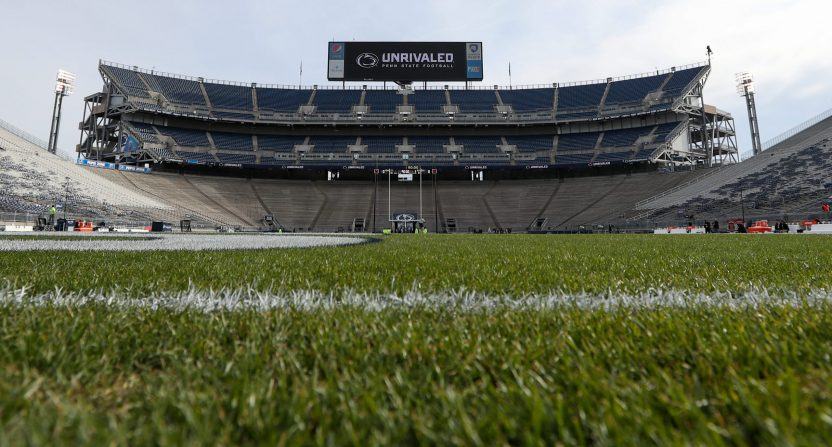 There are a lot of unknowns to the upcoming college football season. Depending on the location, scenarios from games with fans to games not taking place at all are on the table amid the COVID-19 pandemic. While Penn State isn’t quite sure how things will look in a month or two, they are pretty sure that if Nittany Lion fans can attend, it’ll only be fans who have season tickets for Penn State home games.

In a Zoom call to the media, Penn State VP of Intercollegiate Athletics Sandy Barbour revealed the school’s plan for the football season and that plan was understandably incomplete because there are still a lot of unknowns. According to PennLive, Barbour said that the school is talking to Pennsylvania Governor Tom Wolf about how many fans they can have in attendance but was certain that whatever the number is, it’ll be with season ticket holders only.

Even in a best case scenario, Beaver Stadium isn’t hosting 107,000 people this season and Penn State pretty much figured that. As of the day of posting, Pennsylvania has limited gatherings to 250 people or fewer. So the number between 250 and 107,000 is massive. According to PennLive, Penn State has an estimated 43,000 season ticket holders so if season ticket holders could attend, that would still make up about 40 percent of the stadium.

While the situation is fluid, the Nittany Lions are preparing as though they will be playing games in the fall. According to ESPN, Barbour also revealed in the Zoom call that the idea of having football in the spring is a “last resort.” This preparation has resulted in head coach James Franklin leaving his family for the rest of the year to avoid possibly infecting his youngest daughter who has sickle cell disease.