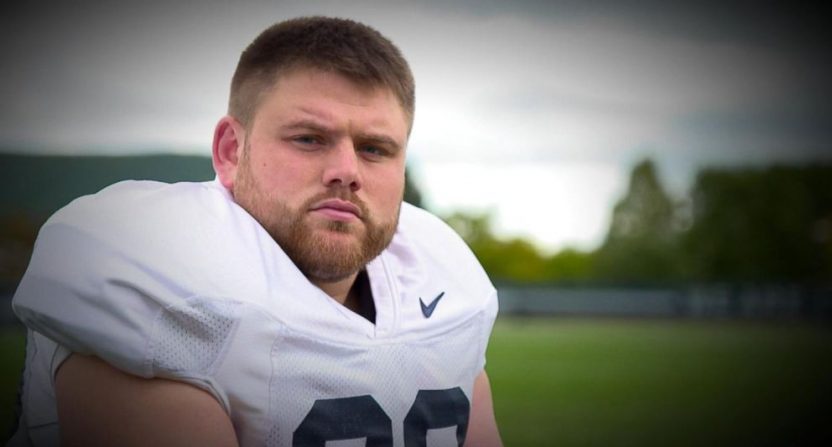 Joey Julius, a kicker on the Penn State football team, announced Friday that he’s currently receiving treatment on an eating disorder that has followed him for more than a decade.

I just wanted to let everyone know since I have been asked a bunch why I was not at blue white or why I am not at school. I have been struggling over the last couple months with my eating disorder. It got to the point where I had to return to St. Louis to seek further treatment at the McCallum place. Recovery is a wonderful and beautiful thing that I am working on returning too. For anyone out there that has similar struggles I hope you too can seek help in some way. Your feelings should be completely validated and I wish you all the best in your search for recovery. Just as an update I am doing well and the treatment is helping. There is light at the end of the tunnel. It is just a very long tunnel.

Julius revealed last fall that he had entered treatment for Binge Eating Disorder, writing that, “Due to my increase in not only weight but also depression and anxiety my team physicians started to notice not only a change in my overall happiness but also my performance as a normal human being.”

He missed all of 2016 spring practice but played through football season—drawing attention for his tackles on kickoffs—before sitting out Penn State’s spring game last month.

The details of Julius’ treatment are of course his business and no one else’s, but he seems interested in spreading awareness for Binge Eating Disorder, the most common eating disorder in America. A 2007 study of English-speaking Americans found that 2 percent of men and 3.5 percent of women had the disorder at one point during their life.

Julius has spoken previously about eating salad in front of his teammates then returning to his dorm room to engorge in less healthy foods.

It can’t be easy for Julius to speak so candidly and publicly about his eating disorder, especially in a society that often treats weight problems as a taboo. Props to him for making us talk about Binge Eating Disorder.