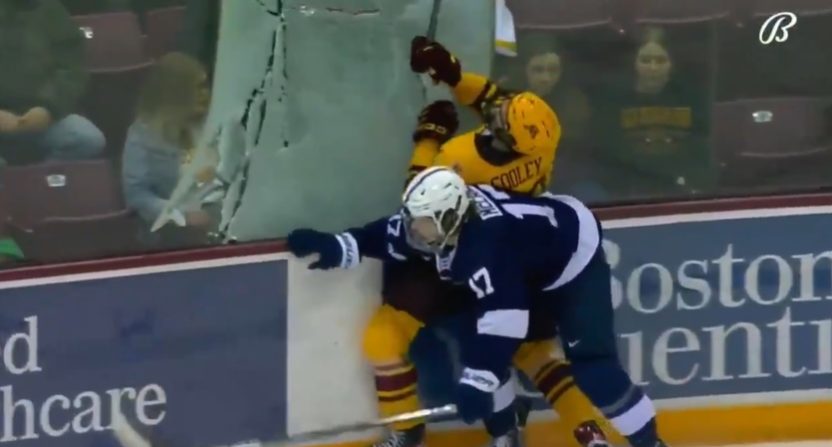 Big Ten rivals Penn State and Minnesota squared off in the rink for a hockey game on Friday night. The Golden Gophers defended their home ice, winning the game 3-1. The biggest highlight of the game, however, was supplied by the Nittany Lions.

Minnesota’s Logan Cooley was skating along the boards, trying to clear the puck out of his defensive zone. As Cooley went to play the puck, he was checked by Penn State’s Chase McLane. The contact caused the glass to shatter.

PSU's Chase McClain drills Logan Cooley and shatters the glass, I do hope the fan is going to be ok pic.twitter.com/EqxJh3dqNs

Two questions must be asked when something like this happens. One, are the players involved OK? By all appearances, they were. Both Cooley and McLane skated off with no issue. Two, are the fans OK? Fortunately, it seems as though any significant danger was averted.

Looks like everyone is okay thankfully, maybe just a minor cut, they are being tended to and walking up the stairs under their own power. https://t.co/CdL3mXnmud

With no serious injuries reported, the focus can shift to what an impressive hit that was.

#Gophers take the W despite Logan Cooley being sent into Section 9, Row 1 late in the third period…https://t.co/6AuFejMhUZ

And of course, the crew in Minnesota deserves ample praise for fixing the ice, allowing the game to resume.

A HUGE shoutout to the ice crew for repairing that pane of glass and getting us back underway! 👏

Friday was the end of a two-game set between the two teams. Minnesota’s win on Friday led to a split, as Penn State won on Thursday night. The Nittany Lions will host their Big Ten rivals for two games later in the year on Friday, February 17 and Saturday, February 18. Given the action we got on Friday, those games are now a little more interesting.