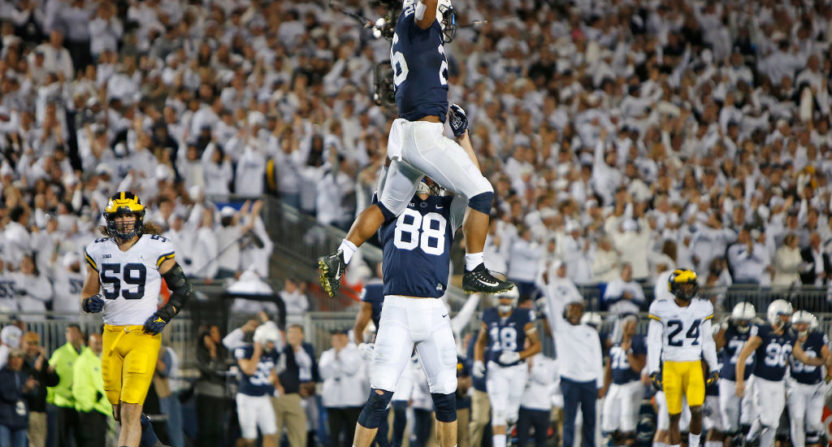 Coming out of a bye week, Penn State was itching to get the ball rolling early against the Michigan Wolverines. A little more than a year removed from an embarrassing 49-10 loss in Ann Arbor, Penn State handed Michigan the worst loss of the Jim Harbaugh era.* Penn State and Saquon Barkley jumped all over Michigan in the first five minutes to build a lightning-quick 14-0 lead, and shut out the Wolverines in the second half while blowing the doors wide open in a 42-13 rout against a team that had entered the week with the top-ranked defense in the nation.

Sure, revenge was nice (and certainly on the minds of the entire Penn State sideline given how the Nittany Lions tried for one last-second play to try and sneak a few more points on the scoreboard), but the more important objective accomplished Saturday night before a record-setting crowd of 110,843 in Beaver Stadium was to win one more game. And that sets the stage for an epic division showdown in Ohio Stadium next week against Ohio State.

The matchup between Penn State’s offense and Michigan’s defense was worth the billing it received going in. Penn State’s Joe Moorehead has become one of the most respected offensive coordinators in the game over the past year, and having players like Saquon Barkley and Trace McSorley and Mike Gesicki have made that possible. It was expected Moorehead would have a few new wrinkles to try out against the defensive gamesmanship of one of the top defensive coordinators opposing him on the other sideline, Don Brown.

Moorehead got the best of his counterpart early on by mixing in a direct snap to Barkley, which worked out with a 69-yard touchdown run to get the game going. Penn State tried mixing in a few more late shifts to a direct snap throughout the game, with marginal success after Michigan got burned the first time. Brown kept Michigan’s defense locked in on stopping Barkley on the ground, and outside of the 69-yard run, they did a respectable job doing so. Barkley ended the game with 108 rushing yards and two scores.

Michigan’s defense got their act together and put the pressure on Penn State by getting penetration on the line of scrimmage and clamping down on Barkley as Northwestern managed to do two weeks ago and forcing McSorley to make some bad decisions. Fortunately for McSorley, he avoided a disaster of a play in his end zone.

Michigan closed the game to 14-13 in the second quarter, but Penn State made sure to go into halftime with the momentum with a late touchdown on a McSorley keeper. McSorley’s running ability came in handy for Penn State with 76 rushing yards and three rushing touchdowns to go with his 282 passing yards and touchdown.

In the end, Moorehead and Penn State’s offense got the checkmate against Brown and his Michigan defense. Michigan had not allowed more than 278 yards of offense all season, and Penn State had 300 yards at halftime and 506 yards at the end of the game.

Penn State’s 501 yards of total offense is the second-most yardage allowed by Michigan under Jim Harbaugh. Indiana had 527 yards on 11/14/15

Barkley scored two touchdowns in the first five minutes to regain some Heisman Trophy momentum, and his good hands to haul in a bobbled reception for a score made up for an early job that likely cost Penn State some points when the game was still in some doubt. After a three-touchdown night with 108 rushing yards and 53 receiving yards against a defense that had held four opponents to fewer than 100 rushing yards this season, Barkley answered his first real Heisman test to get a pivotal make-or-break stretch off on the rght foot.

And now we advance to what could be the game of the year in the Big Ten, with no disrespect intended to the fine folks in Madison, Wisconsin. Penn State and Ohio State will play with first place in the Big Ten East Divison on the line (yes, Michigan State is in the mix too without a loss in Big Ten play, but bear with me). Just like Penn State had a week off to prepare for a revenge game at home, Ohio State will be coming off a bye week to prepare for their own revenge game at home against the only team to hand them a loss in the regular season a year ago. But as we learned from last year, the loser of next week’s tilt may not be removed from the playoff picture right away with so many games left to play. Penn State and Ohio State each still have to play Michigan State as well.

This Big Ten East race is just heating up. If Penn State’s offense can play like this again next week against Ohio State, there may not be much else standing in their way. But the Buckeyes will not be easy to get by on the road.

*  This actually tied the worst loss for Michigan under Harbaugh. Ohio State defeated Michigan by a similar 42-13 score in 2015.