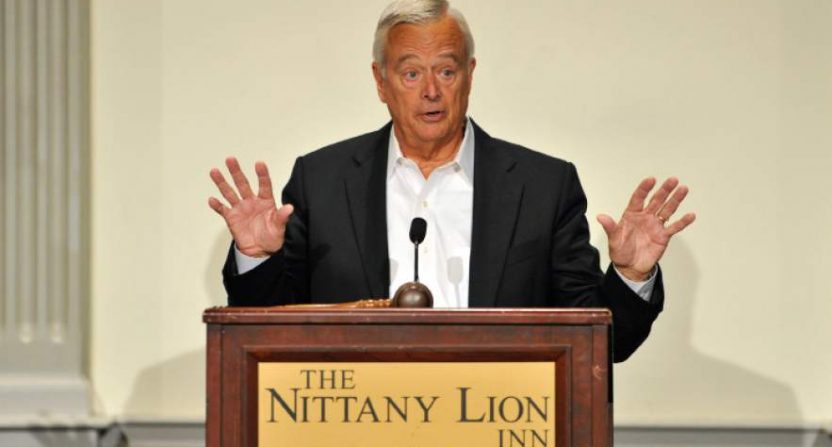 There are a lot of terrible people involved in the ongoing Jerry Sandusky scandal. Penn State trustee Al Lord (seen above in 2014) joined the group of bad guys last week after sending an e-mail about how he was “running out of sympathy for 35 yr old, so-called victims.” Now, he’s dropped his bid for a second term.

“Running out of sympathy for 35 yr old, so-called victims with 7 digit net worth,” Lord said in the email sent Saturday. “Do not understand why they were so prominent in trial. As you learned, Graham Spanier never knew Sandusky abused anyone.”

“Running out of sympathy” and “so-called victims”? That’s gross.

When he made the comments, Lord was running for a second term on the board of trustees, as one of five candidates for three spots in an election that runs through May 4. On Wednesday, Lord withdrew from the race:

Lord has been on the board of nine alumni trustees since 2014 and has been involved in many board debates about how to handle the Sandusky scandal. After announcing he wouldn’t be looking to rejoin the board when his term expires, Lord did say he wouldn’t stop helping his alma mater.

”I’ll continue to work with you guys,” Lord told other alumni candidates. ”I’m just not sitting through any more of those meetings.”

Of course, this is the second time Lord has tried to make up for his “running out of sympathy” comments. A couple days ago the alum released a statement in Penn State’s student newspaper, The Daily Collegian, to apologize for “any pain” his remarks might have “caused actual victims” (while claiming that his remark was supposed to be off the record and bashing the verdict in the Spanier case):

So, that was only a partial apology at best, and it definitely didn’t stop all the criticism directed at Lord. Thus, it would seem likely that his decision to withdraw from the race was at least partly because of that. However, fellow trustee Anthony Lubrano told reporters Lord said his decision to not run for another term on the board didn’t have to do with his sympathy comments, which is odd due to the timing.

”Of course I’m disappointed,” Lubrano said. ”Al was the most cerebral member of the board. He’ll be missed.”

While Lubrano isn’t going to simply throw Lord under the bus, it’s interesting that this situation has unfolded like it has. Lord’s comments drew an incredible amount of scrutiny, and rightfully so. As a result, Lord and Lubrano are trying to play it off that the sympathy comments didn’t lead to Lord’s decision to not seek another term on the board.

Penn State has already settled the civil claims of abuse by Sandusky with at least 33 victims and have paid them more than $90 million. But, as the Lord case shows, there are still those affiliated with the university who don’t think all the victims’ claims are legitimate.