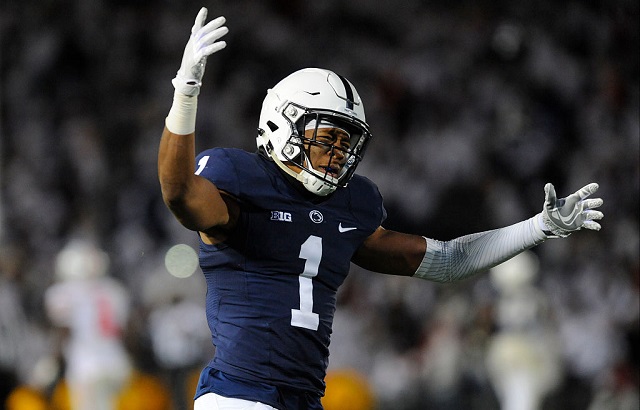 Penn State capped off an unbelievable season by rallying from a 21-point deficit to beat Wisconsin 38-31 in the Big Ten Championship game on Saturday night. There’s sure to be a New Year’s Six bowl in the future as a reward, but could there be more?

Just as we expected, a team from the Big Ten East division won the league title. We just had no idea it would be Penn State.

Stand up if you really believed the Nittany Lions would make noise in the Big Ten this year. Okay, now take down your We Are car window decal and celebrate, because fans tied to Happy Valley are the only ones that allowed that notion to enter their minds.

Michigan, Ohio State, and Michigan State. It was supposed to be a three-horse race in the East, but there was a late entry that found its gate and confidence just in time.

Early in the season, it looked like much of the same for James Franklin’s crew. A loss to Pitt and a 39-point public flogging at the hands of the Wolverines made us all believe this would be another turn-the- page type of year in Happy Valley.

However, on that fateful night in October when Penn State was able to find a way to beat No. 2 Ohio State, things began to change.

Say what you will about the Nittany Lions getting all the breaks to take down the Buckeyes; the reality is they still got it done, and it literally changed the course of their season.

Since that game, Penn State has been unbeaten, rattling off nine straight total to slowly and methodically climb its way back into the conversation for not only a Big Ten title, but a shot at perhaps getting a call for the College Football Playoff.

But that latter point will be hotly debated in the near future and beyond no matter the outcome. We are here to talk about a program that has somehow gotten over the hump after being left for dead.

In some ways, this game was a microcosm of Penn State’s season. Wisconsin used big plays on defense, and a balanced and methodical attack on offense to quickly race out to a 28-7 lead over the Nittany Lions well into the second quarter.

And then the Nittany Lions got off the proverbial mat just like it did after visiting the Big House, getting a 40-yard pass from quarterback Trace McSorley to Saeed Blacknail before the half to get just a wee-bit of momentum heading to the locker room.

From there, you know the script. Penn State began to find a way to slow down the Badger ground game, cut down on the turnovers and mistakes, and continued to use big plays to finally reel Wisconsin all the way in.

And when running back Saquon Barkley took an 18-yard pass from McSorley for seven, the Nittany Lions took the lead for the first time 35-31, and never gave it back, getting another field goal to stretch the lead to seven to set up the drama in Indy.

McSorley throws a dime to Barkley, who gives Penn State their first lead of the game! #B1GChampionship #PSUvsWIS pic.twitter.com/xIdl7IUo88

Wisconsin had a late charge and last chance, but perhaps ironically, it was Penn State’s defense (and not the Badgers’) that sealed the game with a fourth-and-one stop in Penn State territory. From there, it was just a matter of running the clock out.

So now we wait, wait to see where Penn State is headed. With a head-to-head win over Ohio State, another top-ten win today over Wisconsin, and a trophy as the league champion of the best conference in the country, there will be a hard look from the College Football Playoff Committee to now consider the Nittany Lions.

But if that happens, someone has to be left out. You figure Alabama is in, so that leaves Ohio State, Clemson and Washington all sitting and waiting to see what happens tomorrow at Noon.

If you think you know, you might want to re-consider. After all, Penn State just won the Big Ten Championship. If that doesn’t reset the confidence in your college football knowledge of what’s going to happen, I don’t know what will.

We Are … all waiting.