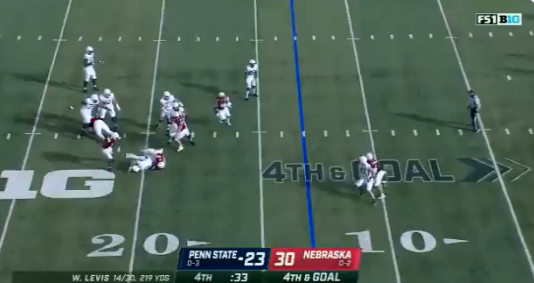 The circumstances surrounding Saturday’s Big Ten showdown between the Penn State Nittany Lions and Nebraska Cornhuskers were…unique, at least in terms of the history of these two proud college football programs.

The loser of Saturday’s game would sit firmly in the basement of the Big Ten and find themselves doing a lot of soul searching (and potentially coach-searching) for the foreseeable future. And, in the first half, all signs pointed to Penn State being the one who’d be left behind.

The Nittany Lions looked wholly inept and out of sorts throughout the first half. Wild turnovers and bad plays added up and they found themselves down 27-6 at halftime.

However, Penn State did have one trick up their sleeve…they were playing Nebraska. And that meant they could work their way back into the game in the second half, starting with a 31-yard touchdown run by Keyvone Lee.

Both teams traded field goals and then the Nittany Lions got back within one score thanks to a Devyn Ford touchdown run that was immediately followed by an interception that gave them the ball back and a chance to tie.

Penn State (-2.5) comes up with HUGE interception in the 4th.

Nittany Lions knocking on the back door?

However, despite driving all the way down to Nebraska’s red zone, Penn State couldn’t convert or score and turned it over on downs.

NOT GONNA GET IT

True to form, the Lions would get one more crack at this thing and once again find themselves in the red zone with a chance to tie before time expired. They…did not.

THE SACK SEALS THE VICTORY! 💪

With that, Penn State drops to 0-4 for the first time since 2001 (though if it’s any consolation they ended up going 5-6 that year). And in true Penn State fashion, the stats were just as confusing as their overall record.

Penn State had 25 plays that weren't field goal attempts in Nebraska's red zone Saturday. It scored one touchdown among those plays.

There’s going to be a lot of looking around and wondering what’s going on in Happy Valley. Head coach James Franklin has certainly had his share of success there, coming off his third 11-2 season in four years. And you have to keep in mind that the 2020 college football season is bizarro in many ways. That said, Penn State probably should never be 0-4 and since that’s the case, someone is going to need to find some answers soon.