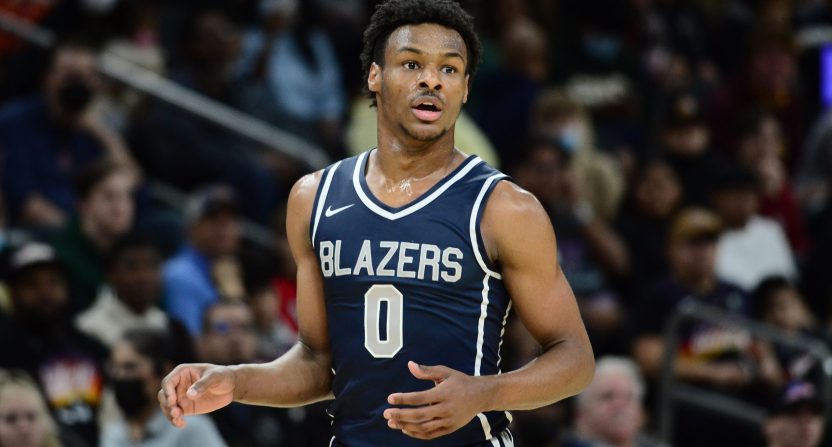 The Memphis Tigers weren’t listed in the odds as a potential destination for Bronny James but a new report claims that Penny Hardaway has offered James a scholarship to play for Memphis.

According to On3’s Joe Tipton, the Tigers have offered the Sierra Canyon High School star an opportunity to play for Haradway’s program, making the school the fourth reported offer for James, with the other three being USC, and two HBCUs in North Carolina A&T and North Carolina Central.

Jamie Shaw of On3.com revealed that Oregon and Ohio State are also interested in James playing for them.

According to Shaw, Oregon was considered as the front-runner for Bronny but according to LeBron, his son has yet to take any visits to any school, posting a comment on Twitter dismissing the notion and calling it “too early of a stage in the recruiting process” to speculate.

He hasn’t taken 1 visit yet and has only had a few calls with coaches and universities. When Bronny makes his choice you’ll hear it from him. #JamesGang👑 https://t.co/BBciKxl7m8

Hardaway was one of many coaches in attendance at Nike’s Peach Jam last month, where Bronny put up an impressive performance, averaging 15.8 points, 5.8 rebounds and 5.3 assists in six appearances.

The sweepstakes for the 17-year-old James will be fierce. The link between Hardaway and Bronny, a four-star prospect and the No. 43 overall player in 247Sports’ composite rankings for the 2023 recruiting class, seems to be a lot more than wanting LeBron’s son to play for him. LeBron’s youngest son, Bryce plays alongside Hardaway’s son, Ashton on a traveling team.

A four-star recruit in his own right, the forward will actually be transferring to Sierra Caynon to play alongside Bronny.

Under Hardaway, the former NBA All-Star has managed to bring some incredible talent on campus, including a top-ranked class in 2021 that consisted of six total commits, including five-star recruits Emoni Bates and Jalen Duran.