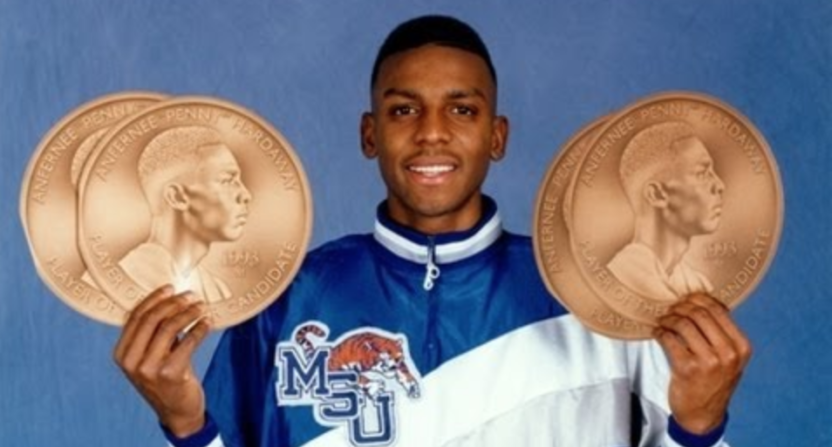 The Memphis Tigers are set to face South Florida Thursday afternoon in the American Athletic Conference tournament. As if the No. 5-seeded Tigers didn’t have enough to occupy them with their first-round game and a possible Friday matchup with Tulsa if they win, Memphis begins the tournament with one of the more bizarre rumors of the postseason hanging over them.

According to CBS Sports’ Gary Parrish, Memphis is considering replacing head coach Tubby Smith with acclaimed former star and Memphis native Anfernee Hardaway. The former Tigers star is reportedly already eyeing coaches for his staff, one of which could be Hall of Fame coach Larry Brown. (Perhaps not coincidentally, Parrish mentions that Brown raved about Hardaway on Memphis radio last week.)

Penny Hardaway is a big name in Memphis, starring on local YMCA teams before a career at Treadwell High School that finished with 3,039 points and honors as Parade’s National High School Player of the Year award. From there, he went to what was then Memphis State, playing for the Tigers from 1991 to 1993. During his two seasons, he averaged 20 points, six assists and nearly eight rebounds per game. The 1991-92 team he led advanced to the Elite Eight in the NCAA Tournament, beating Pepperdine, Arkansas and Georgia Tech before losing to Cincinnati — now an AAC rival.

As storied as Hardaway’s playing career was, he doesn’t have any college basketball coaching experience. Having a veteran with college and NBA experience — which includes championships with Kansas and the Detroit Pistons — like Brown on his bench would surely help with that.

Maybe he could have Lil’ Penny provide coaching tips on boxing out, as well.

However, Hardaway has been coaching. He’s currently the coach at Memphis East High, ranked No. 1 in the state with a 25-3 record, and runs a local AAU program. As the Memphis Commercial Appeal’s Mike Giannotto points out, those two jobs tie Hardaway to four of the nation’s top 100 recruits for 2019: James Wiseman (No. 1, according to 247 Sports), D.J. Jeffries (No. 26) and Chandler Lawson (No. 40).

Besides Hardaway’s name recognition and local standing, that recruiting potential has big appeal for Memphis. Smith hasn’t recruited well (failing to draw any local talent) and the future doesn’t look any brighter on that front. Hardaway thinks he could make an immediate impact, which could lead to a quick turnaround for the program.

Smith is in his second season coaching the Tigers, who finished the regular season with an overall 19-12 mark that included a 10-8 conference in the AAC. While that record is disappointing for someone with Smith’s resume — which includes a national championship at Kentucky, albeit won 20 years ago — a bigger concern for school officials is reportedly the dwindling attendance at Memphis home games.

The Tigers drew around 6,000 fans per game, down 3,400 from a season ago. During Josh Pastner’s last season at Memphis before going to Georgia Tech, men’s basketball games drew an average of 12,000 per game. The 2017-18 attendance is a significant decrease from four years ago, when Memphis averaged 16,000 fans per game and ranked among the nation’s top 10 in attendance.

Worst of all, the low attendance will cost the school $800,000, as part of its lease agreement with the NBA’s Memphis Grizzlies to play at FedEx Forum. The Grizzlies could cancel the lease if the Tigers average less than 6,000 fans for two consecutive seasons.

Fans clearly aren’t responding to Smith as coach and don’t anticipate much success for the program. School president David Rudd hardly gave a ringing endorsement, telling the Commercial Appeal, “We’re going to evaluate the program at the end of the year.” Smith has three years left on his contract and would cost Memphis a $9.75 million buyout.

Bringing in a local legend to coach the team could provide a major boost. (“Memphis fans just want something to believe in,” a source told Parrish.) At least that’s what school officials seem to be hoping for with a flashy move that would definitely make headlines.