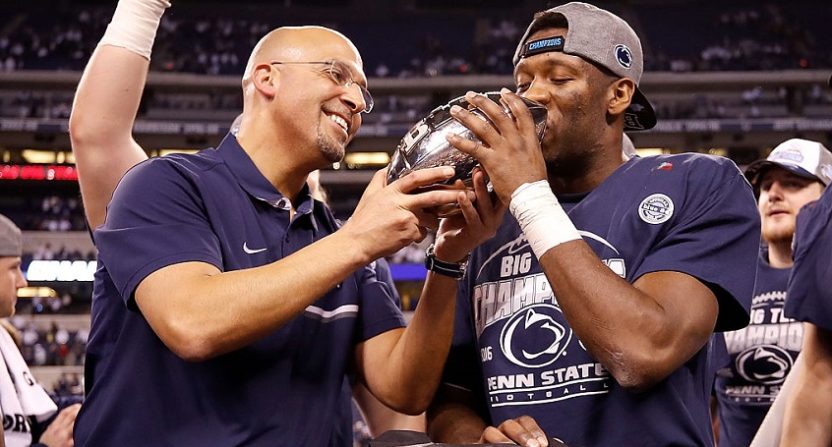 College football is rife with “what ifs” and turning points. It’s hard to find a bigger one than Penn State’s blocked field goal against Ohio State in 2016. It was one play, it was a fluke, and it changed the perception of the Penn State program under James Franklin.

His seat still felt rather warm in October. Franklin lost his competitive non-conference game against Pitt. Michigan obliterated the Nittany Lions by 39 points in Ann Arbor. Penn State did rebound to beat Minnesota in overtime. But that was the team’s best conference win (up to that point) under Franklin. It was the first conference win that was not against Indiana, Maryland, Rutgers, or Illinois.

Then came the Ohio State game on Oct. 22. Even into the fourth quarter, it looked like a perfunctory Buckeye win. The Ohio State offense, not exactly rolling at that point, had done enough to get a 21-7 lead. The Nittany Lions scrabbled their way back with a touchdown and a field goal to make it 21-17.

Ohio State attempted a field goal to regain a seven-point lead. Penn State blocked the attempt. It bounced well to the right, to the Nittany Lions’ edge rusher Grant Haley who had a clear path to the end zone and a 24-21 Penn State lead.

The play was not 100 percent fluky. But most of it was. Blocking a field goal requires some skill. Yet it also calls for an equal part or more in execution errors by the kicking team. Haley did a great job returning the ball. However, it was fortune that dropped the ball into his path instead of the ground.

Fortunate or not, the play happened. It earned Penn State the big upset. That upset morphed into much more when it became apparent Penn State had a route to winning the B1G East.

The Nittany Lions’ remaining schedule was soft. PSU had road trips to Purdue, Indiana, and Rutgers. They faced a horrible Michigan State team and a mediocre Iowa one at home. Penn State ending up 7-1 in the Big Ten, with a head-to-head against Ohio State, was probable.

Winning out, Penn State needed Michigan to finish 6-2. The Wolverines had the head-to-head win over Penn State. A three-way tie between OSU, PSU, and Michigan would have sent Ohio State to the title game. The Hawkeyes obliged with a November surprise. Then Michigan lost a narrow game in Columbus. Penn State won the division.

The Nittany Lions came from behind to beat Wisconsin and won the conference, adding a second quality win (and first that didn’t come on a blocked field goal). Penn State had one good regular season win, on a fluky play. But they were Big Ten champions. Had Clemson or Washington faltered in their title games, Penn State probably would have gone to the playoff ahead of Michigan, the team that beat them by 39.

That opening, again caused by a fluke play, could pay even further dividends for Franklin. He is an active recruiter and Penn State is an “it” program, at least for now. Penn State has the nation’s No. 3 overall class on board for 2018, per the 247 Composite and four Top 100 overall recruits.

The Penn State resurgence narrative does not have the firmest foundation. Everything comes down to one fluke play. But, with confidence building in Happy Valley and recruits coming in, the origin may not matter.

1 thought on “Perception of James Franklin and Penn State changed quickly; one play made the difference”