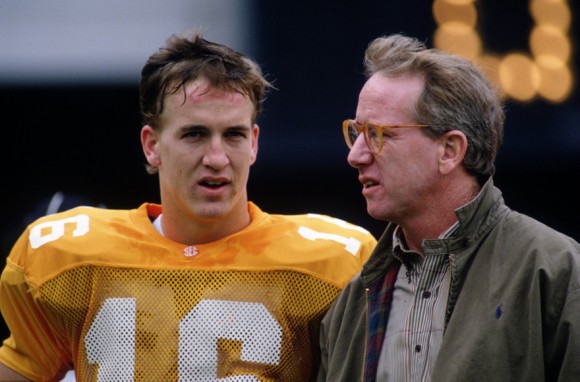 The Manning Family is and has been one of football’s greatest legacies.

Archie Manning was a likeable face of the South, from his college days at Ole Miss to his NFL career with the New Orleans Saints. He has continued to represent the sport in high-profile capacities with his involvement with the National Football Foundation and the College Football Playoff. Peyton Manning is now a two-time Super Bowl champion and surefire first-ballot Pro Football Hall of Fame player. His younger brother, Eli Manning, also has a pair of Super Bowl rings and several years left in his pro football career.

The Mannings are to the NFL what the Royal Family is to the United Kingdom. In recent weeks, however, the image of Peyton Manning has taken a number of hits. Reporters from multiple outlets have dug into his past to paint another portrait of Manning.

In February of 1996, Manning, then a quarterback for the University of Tennessee, was accused of a sexual assault in which he forced the face of Dr. Jamie Naughright, a team doctor, into his groin area while being examined on a trainer’s table. Manning initially denied the incident took place. As part of a settlement agreement, Naughright ended up leaving the school despite having worked there for the previous 10 years. In that agreement, Naughright was asked to pin the blame for the incident on another student-athlete, which she refused to do. Naughright testified that Manning, on multiple occasions, reenacted the alleged sexual assault on other student athletes to “terrorize her.”

Here is how the latest reporting on the incident is told by Shaun King of the New York Daily News that is based off the release of a 74 page document filed by Naughright and her attorneys against the Mannings. You can and should read the entire document here:

On Feb. 29 of that year, Naughright, at that point the university’s director of health and wellness, was in a training room, examining what she thought might be a possible stress fracture in Manning’s foot. At 6 feet, 5 inches, his feet dangled off the edge of the table. Manning allegedly then proceeded to scoot down the training table while Naughright examined his foot. At that point, she said, he forcefully maneuvered his naked testicles and rectum directly on her face with his penis on top of her head. Shocked, disgusted, and offended, Naughright pushed Manning away, removing her head out from under him (see pages 14-15). Within hours, she reported the incident to the Sexual Assault Crisis Center in Knoxville (see page 18).

According to the court records, Manning initially denied the incident ever took place. It was a calculated risk. He was the star quarterback, a Heisman trophy hopeful, and a likely No. 1 pick in the NFL Draft. While Naughright was now a respected member of the staff, Manning was the star, the savior of Tennessee football. It was his word against hers.

When the Mannings released a book, Manning: A Father, His Sons, and a Football Legacy, Peyton shared his take on the story, a possible attempt to get the final word in writing.

Manning suggested Naughright had a vulgar mouth, a theme he later went on record with during a deposition. This idea was later disputed — strongly — by multiple witnesses under oath. The ghostwriter for the book, John Underwood, reportedly testified that Archie Manning helped pile on in the attempt to trash Naughright’s image.

Under oath, the ghostwriter, John Underwood revealed that Archie Manning suggested to him that Naughright was going into the dorms and having sex with large numbers of black student athletes. After saying that she was up in the dorms with black students, Archie, states:

“And, she’d, she’d, been up in the dorm before, I mean hey, you know, they could have, you know, could have pulled off stuff on her too. Ah, she, toilet mouth, ah Peyton told me he never did like her, but he always did, cause what I’d told him to do, ah, I instructed him to be nice to the tr- … don’t ever look down on a trainer or an equipment person you know.”

According to the records, attorneys for Naughright drilled person after person, staff member after staff member, asking them to identify an instance where they heard Naughright use vulgar language. Not a single person could do so. One after another, those who claimed she was promiscuous admitted under oath that they didn’t have any evidence to support such claims. Instead, everyone, to the person, claimed they had just heard such charges from somebody who heard from somebody that it might be true (see pages 37-40). No one with firsthand knowledge testified to her ever being vulgar or having sexual relationships with student athletes.

When the Manning book was released, the image painted of Naughright made its way to her then-current employer, Florida Southern. The information led the university to dismiss Naughright, which prompted Naughright to file a defamation suit that ended in a settlement behind closed doors. A separate settlement with Tennessee netted a $300,000 award for Naughright.

Had this sequence of events taken place in the current age of social media in which we live, the odds are good this story could have had a much larger impact on how the football public views Peyton, and perhaps Archie as well. This is not to suggest it would have knocked Peyton off the football map, though. It’s impossible to know what would have happened had a bigger deal been made of this story at the time, instead of burying the details as much as possible.

The timing of this latest rehash of the Manning story comes immediately after two major events in the sports world. First, it follows what may have been Manning’s curtain call on the football field on the biggest possible stage there is, the Super Bowl. Second, King’s story in the New York Daily News (amplifying previous reports from other outlets) emerges as the University of Tennessee is faced with accusations of turning a blind eye to sexual assault claims on campus involving football players.

The Peyton Manning story casts Archie Manning in a negative light, more than at any previous point in his life as a public figure and the patriarch of a famous football family. That’s a headline-worthy development, and yet, it’s hardly the lead item. The extent to which the University of Tennessee’s internal culture has enabled aggressive and inappropriate sexual behavior to go unpunished (and in the eyes of some, to actually be rewarded) is going to receive even more scrutiny now. Stories such as this one and this one are likely to continue to appear in the coming months.

Any patterns of institutional conduct which might have marginalized the lives or reputations of sexual assault plaintiffs (whether vindicated in court or not) could reverberate through Knoxville for some time to come.

Peyton Manning will have played a role — a dark one perhaps — in shaping that larger story.