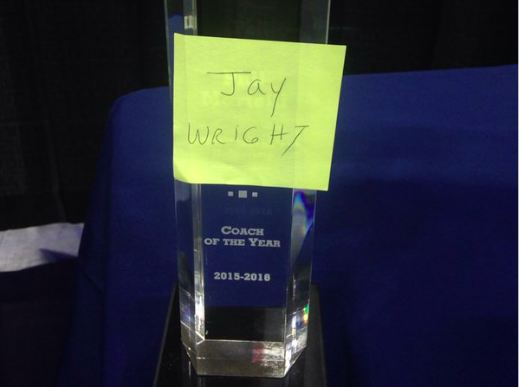 Big 5 basketball is amazing. People might think Philadelphia is strictly a pro sports town, and they’re mainly right, but forgetting Big 5 hoops altogether is a mistake. Villanova, St. Joe’s, Drexel, Penn and Temple (plus La Salle) all play each other every year. It is, and always will be, a big deal in the city.

The Big 5 recently had an awards dinner and jamboree, and gave out the award for the best coach in the Big 5 during the season. You might think it went to Villanova’s National Title-winning coach Jay Wright. But it didn’t. It went to St. Joe’s Phil Martelli, who had a great year in taking the Hawks to the Round of 32 in the NCAA Tournament and also won the A-10 Tournament. But that’s not the National Title. So, here’s what he did in response:

Might not be permanent, but it’s at least a concession that Wright should have won.

Martelli also had some fun with the honor during his speech:

“Seriously, there’s not one person in here that would say ‘Big 5 Coach of the Year? It must be Phil Martelli! It’s not Jay Wright!. Jay, this is yours. I’m going to borrow it for an hour and if I can get into your gated community in Newtown Square, I’ll drop it off.”

In the pantheon of Philly sports screw-ups, this one is still pretty low, behind cheering Michael Irvin’s career ending concussion on the concrete turf of the Vet, Sam Hinkie’s entire tenure with the Sixers, and Ed Snider signing Ilya Bryzgalov over the wishes of his GM, but this is still fairly hilarious.

The trophy will be displayed in the hallowed corridors of The Palestra at Penn and whether the Post-it note sticks around is yet to be seen.