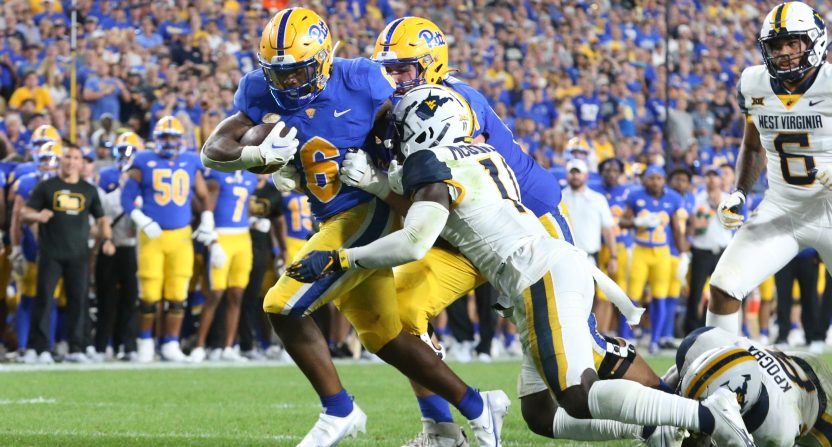 Fans have waited a decade for another edition of the Backyard Brawl between Pittsburgh and West Virginia. They were finally treated to one Thursday night, and it lived up to the hype and much more.

With the game tied heading into the fourth quarter, the Panthers’ backs were against the wall until MJ Devonshire took an interception through the hands of one of his receivers, taking the ball 50 yards to the house.

PITT PICK-SIX FOR THE LEAD! 🏈 pic.twitter.com/d1KtHqhM1A

With the Mountaineers having a chance to tie it up, they managed to get the ball all the way to the one-yard line, where the Panthers were able to keep them out of the end zone to win the game 38-31.

West Virginia was this close 😳 pic.twitter.com/rLT831wVTf

The Backyard Brawl is fucking awesome.

Wish we could get Backyard Brawl every year, but storied conference rivalries like WVU v. BYU take priority.

Look, I covered 2016 Texas-Notre Dame. You never totally know what a thrilling opener says about a team.

But I do think Pitt and West Virginia are both gonna be good this year. Real glad we get Backyard Brawl in 7 of the next 10 years.

We need the Backyard Brawl every damn year.

With the win, we learned that both teams can be threats in their conferences. Pitt could take advantage of a weak ACC again but will have to fend off the likes of Clemson first before talks of repeating as conference champions start to begin in Pittsburgh.

As for West Virginia, they likely won’t win the conference, but they can certainly upset a few teams and find themselves in second or third place in the conference. Especially the way Daniels performed on Thursday, finishing the loss with 214 passing yards and two touchdowns.