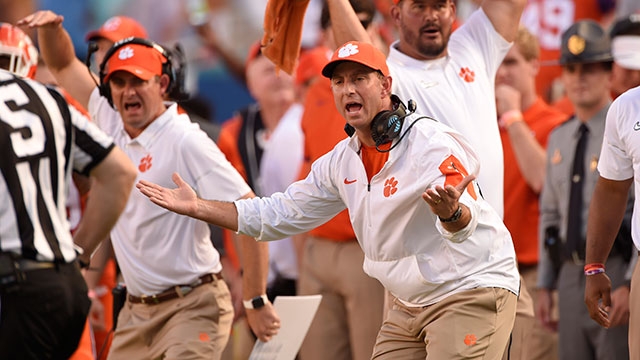 When Clemson fans reflect on the 2015-2016 season which ended in dramatic fashion on Monday night in Arizona, they’ll think of this theme: plenty of positives, but not quite perfect.

That last phrase describes the Tigers’ performance in the national championship game against Alabama. There were a lot of things to be pleased with, but in the end, things didn’t go perfectly.

Make no mistake about it: there are plenty of positives to take away from this game for Clemson. For starters, the Tiger offense racked up 550 yards against the Crimson Tide defense, which entered the contest ranked second in the FBS in total defense. While Derrick Henry ran for 158 yards, the Clemson defense did a great job of forcing negative plays for most of the evening, limiting Alabama to 138 yards rushing and 3 yards per carry – the Tide’s second worst performance of the season in both categories.

As a result of these developments, the Tigers led this contest, 24-21, heading into the fourth quarter, and looked like they were going to win their 52nd straight game when leading after three quarters, the longest active streak in major college football.

Unfortunately for Clemson, it didn’t work out that way.

Faced with a third and 11 from the Alabama 44, Jake Coker connected on a 38-yard pass to ArDarius Stewart to put the Crimson Tide in the red zone. While the Tigers would hold Alabama to three points, Nick Saban reached into his back of tricks and called for an onside kick. This decision caught Clemson completely off guard, giving Alabama the ball at midfield. Two plays later, Coker connected with O.J. Howard for a 51-yard TD strike to give the Tide the lead.

Yet, Clemson wouldn’t quit. Rather than sulk about falling behind, the Tigers marched into Alabama territory and scored a field goal to cut the lead to 31-27. All the team needed was to force a Crimson Tide punt, and it would have the opportunity to win the national championship.

Sadly, the Tigers would never get that chance. Kenyan Drake returned the ensuing kickoff 95 yards for a touchdown to put the Tide up by double digits, marking the first time Clemson trailed by more than seven points all season.

Drake’s return was pretty much the nail in the coffin. While the Tigers scored a TD to cut the Tide’s lead to 38-33, they later gave up another big pass play to Howard on second and 13, giving Alabama the ball at the Clemson 13 with just over three and a half minutes to play. The Crimson Tide converted two crucial third-down runs on that drive – something opponents struggled to do against the Tiger defense all season long – to put the game out of reach at 45-33.

Those miscues – two special teams gaffes and two coverage busts – were the difference between winning and losing. Had just one of these things not happened, Clemson would have won its first national championship since 1981.

However, instead of blaming the Tigers, it’s important to give Alabama all the credit for winning this contest. While they very easily could have lost this game, the Crimson Tide came up with big plays when they needed them the most. That’s the mark of a championship team and one that deserves to hoist a gleaming trophy.

At the same time, Clemson players should leave University of Phoenix Stadium with their heads held high. Sure, they would have liked to win the College Football Playoff, but when they look back on the 2015-2016 campaign, they’ll see many more positives than negatives.