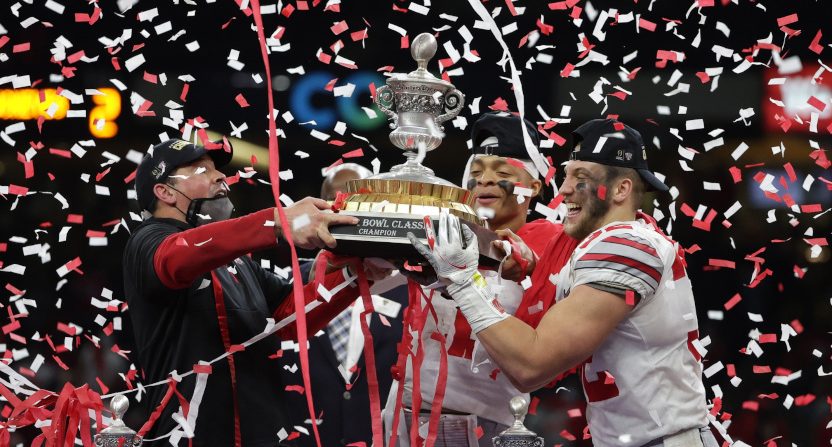 It’s possible that the College Football Playoff championship game may not actually be held Monday, Jan. 11 as planned. After plenty of rumblings that an alternate date was being contemplated thanks to COVID-19 positives and contact tracing issues with an Ohio State position group (likely the defensive line, which already saw two players missing for the Sugar Bowl semifinal, seen above), John Talty and Matt Zenitz of AL.com broke the news Tuesday that there have been official discussions about moving the game to Monday, Jan. 18:

In the latest twist of a season full of disruptions, there are COVID-19 related concerns that threaten to disrupt Monday’s national championship game between Alabama and Ohio State.

There are concerns related to Ohio State’s player availability for the game, according to sources, setting up a massive decision less than a week from when the game is scheduled to kick off in Miami. Ohio State has informed key parties involved it could be without a position group due to COVID-19 testing and related protocols.

There have been discussions amongst the SEC, Big Ten, the College Football Playoff and the schools related to possibly postponing the Jan. 11 title game, sources said, though a final decision on the situation has yet to be reached. The CFP has already established Jan. 18 in Hard Rock Stadium as the makeup date should the title game have to be postponed.

Multiple Ohio State reporters then confirmed the news of a possible move, as did several national college football reporters. However, those reports and TCB’s own sources confirm that the game is currently set be played on Jan. 11 as initially scheduled. Sports Illustrated‘s Ross Dellenger had a good summation of the situation, and how it could change rapidly:

CFP officials are monitoring Ohio State's COVID issues/numbers on a daily basis, as you'd expect. The Buckeyes are testing daily.

Again, as we reported, the game is on for Monday for now, but there has been discussion about a postponement in case numbers continue to decline.

Following up on the Ohio State COVID issue. I'm told Alabama and the SEC are pushing hard to play the game…Ohio State is too. But the Big Ten office is pushing to postpone.

This is an interesting situation, as there are pros and cons to both moving the game and not moving the game. On the con side, a delay would be a highly unprecedented move for a championship, and one that would seem to have a significant competitive advantage for Ohio State; although a delay might help Alabama get receiver Jaylen Waddle back from injury, that doesn’t seem all that big next to the Buckeyes potentially playing without a good deal of a position group. There’s also no guarantee that both schools will be free of COVID-19 concerns a week later. (And this whole thing does raise questions about college football’s attempt to have its postseason without a bubble, unlike men’s college basketball, with the NCAA announcing Monday that the entire 68-team men’s basketball tournament this year is set to be played in a bubble in Indiana.)

And moving an event of this scale would pose some logistical challenges with travel and hotels for everyone involved (from players to coaches to broadcasters and cameramen to event staffers), and challenges for ticketholders (a limited number of tickets have been sold), and for ESPN on their programming and advertising sides. And this would be the second time this season where previous rules were altered in the Buckeyes’ favor, following their placement in the Big Ten championship game despite only playing five previous games (contrary to the conference’s initial 2020 ruie that championship game eligibility required playing at least six regular-season games).

On the other hand, though, there are some merits to the idea of moving the game if an insistence on playing on the initial Jan. 11 date would wind up with Ohio State so limited as to be uncompetitive. An utter blowout in a national title game thanks to an entire missing position group for one school isn’t really good for anyone (apart from Alabama, and even there, there’s an argument that the Tide are better off facing a more full-strength team and not having an asterisk on the title if they win), and it’s seemingly particularly disastrous for ESPN’s audience numbers.

And those numbers matter not just to ESPN, but to the schools and the CFP infrastructure. Yes, ESPN has already paid in advance for CFP rights through 2025, so lower viewership (and thus, advertising makegoods) is currently mostly a problem for them, but the schools and the CFP want the most eyeballs possible on their games to help with the next TV contract. And it’s not like Jan. 18 is really a worse date for ESPN to televise this; there seemingly isn’t a large difference in those dates from a TV perspective.

At any rate, this story will certainly bear watching in the week leading up to the (scheduled) title game. At the moment, it seems like the game is set to proceed as planned despite Ohio State’s COVID issues. But that all could change, and it will be interesting to see if it does change.