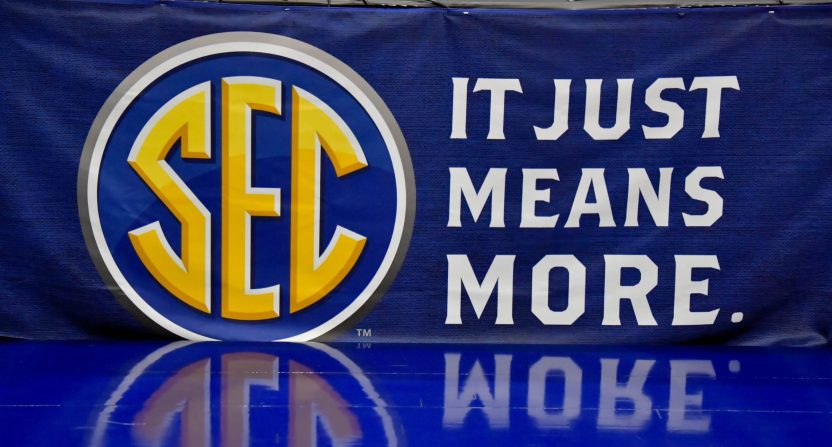 According to the Houston Chronicle, Big 12 powerhouses Oklahoma and Texas have reportedly reached out to the SEC about joining and creating a 16-team “super conference.” It was also revealed that an announcement could come “within the next couple weeks.”

SEC commissioner Greg Sankey issued a “no comment” and a “high-ranking Texas official” told Rivals.com’s Anwar Richardson that they had “nothing to say.” So while they obviously didn’t admit anything, they also didn’t deny anything either. Many are taking that as a hint that there might actually be something to the story.

If this actually happens, it would have a massive ripple effect throughout college football. The SEC would be even stronger while the Big 12 would essentially lose their top two revenue generating schools. For the two schools, it would be a more difficult road to the College Football Playoff (even if it expands) but it’s clear this is more of a financial decision than a competitive one.

Given that 3/4 of the SEC would have to approve Oklahoma and Texas, it might be somewhat difficult for those schools to get the votes. Either way, it’s got the college football world going.

College Football Twitter after the Texas and Oklahoma to the SEC rumors #SECMediaDays pic.twitter.com/P7lAbqfynD

I would think ESPN would love the chance to reward the SEC for poaching Texas and Oklahoma and keeping them off of Fox forever.

Just imagining Texas and OU in the SEC, I decided to take a stab at redesigning the divisions.

I'm sure this definitely won't annoy anyone on Twitter. There's just no way. SEC fans are too tame for that. pic.twitter.com/zpHtzQ6OUm

Oklahoma and Texas to the SEC rumors coming off the CFP expansion to 12 teams makes a lot of sense. The SEC’s 16-team super-league could fill half the field most years.

If Texas and OU join the SEC, that paves the way for other Big 12 teams to make the CFP given the new expansion rules. 6 highest-ranked conference champions get in.

Not saying I'm a fan of Texas and OU leaving, but there would at least be a plus side to it. https://t.co/gqmxYlBEQY

Texas and OU lobbying behind the scenes tirelessly to join the SEC while simultaneously selling recruits that the Big 12 is in no way inferior is 100% on brand.

Texas wants to be the fifth-best team in the SEC West. That's cute.