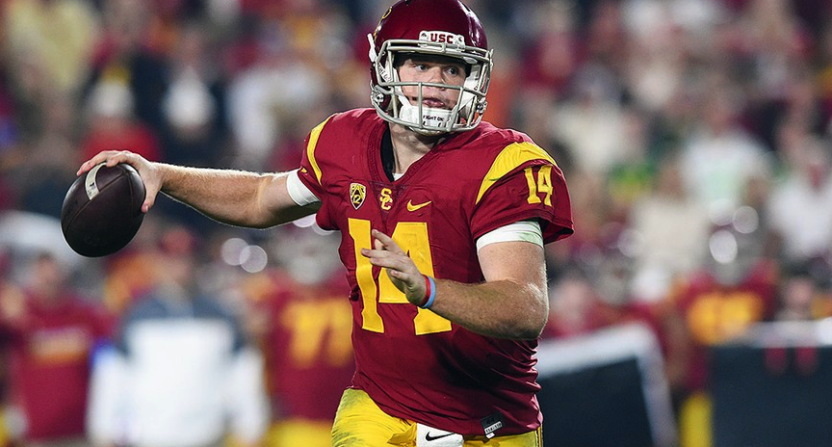 Many people have a favorite college football team. Usually, it’s your alma mater. Sometimes, it’s a school in your home state. But what about those of us who didn’t grow up rooting for one particular university?

Have no fear. We’re going to help you decide which Power 5 colleges to cheer for this fall. Some of these teams will be good. Some will be awful. Rest assured, they all need your support.

College football is better when Miami matters. The U might be the most polarizing program in the history of the sport. No, this isn’t the motorcycle gang of the 1980s. Nor is it the talent-rich team of the early 2000s (Clinton Portis, Willis McGahee, Najeh Davenport, and Frank Gore were in the same backfield in 2001). But these Hurricanes might be a decent sleeper pick to win the national championship.

Mark Walton is one of the best all-around backs in America. He runs (1,117 rushing yards and 14 touchdowns) and catches (240 yards and a touchdown) the ball as good as anyone. Wide receiver Ahmmon Richards broke Michael Irvin’s freshman record with 934 receiving yards. Linebacker Shaquille Quarterman is all ACC defender. The running game and defense might have carry the load early until the quarterback situation is solidified. It’s a four-man race between junior Malik Rosier, sophomore Evan Shirreffs and freshmen N’Kosi Perry and Cade Weldon. Maybe Mark Richt should just spin a wheel.

Admit it. You get excited just thinking about Luther Campbell embracing Richt.

You should be happy if: They win reach the ACC Championship game.
You should be terrified if: You see any Nevin Shapiro associates in the stands.

Anybody can be an Ohio State or Michigan fan. That’s easy. It takes a special type to root for Rutgers. You can’t even call them lovable losers. They don’t have a national following and most years, they barely have a regional following. Winning occurs about as often as an eclipse. Where have you gone, Greg Schiano? Oh yeah, Ohio State.

Moving into the Big Ten effectively killed any chance of Rutgers football being competitive again. Last year, the Scarlet Knights (2-10) bottomed out and were arguably the worst FBS squad in America. They were tied for the second-lowest winning percentage in the nation along with Texas State, Virginia, Massachusetts, Buffalo, and Kansas. They went winless in the Big Ten, outscored 360 to 86. This program should be in hospice.

The Big Ten Network is showing something called Rutgers Football Classic. No, really.

Is there any hope this fall will be better? No. Rutgers is picked to finish last in the East Division and will probably have the worst record. When your best player is a kickoff/punt returner, you’ve got problems.

You should be happy if: They win more than two games.
You should be terrified if: You see Chris Christie in the stands.

Kliff Kingsbury feels like yesterday’s news. He’s no longer the rising star who parlayed being the offensive coordinator for a Heisman Trophy winner (Johnny Manziel at Texas Tech in 2012) into a major-conference job. The 38-year-old is no longer the youngest coach in the conference (Oklahoma’s Lincoln Riley turns 33 next month). On the plus side, he did regain his title as the handsomest coach in America. (It came on a technicality. Dreamy Bob Diaco got fired from UConn in December.)

Good looks will only get you so far. Kingsbury is in danger of losing his title as well. In four years in Lubbock, he’s 24-26 and has had a losing record two of the past three seasons. This could be his final season. (The Red Raiders were picked to finish third to last in the league.)

The Big 12 needs Kingsbury. Not because he’s eye candy, but because Texas Tech is the most exciting team in the conference. You never know if the Red Raiders are going to score over 50 points, give up over 50 points, or both. That’s entertainment.

You should be happy if: They win 10 games.
You should be terrified if: You see Texas Tech Human Resources in the stands.

Who doesn’t miss the good old days when Snoop Dogg, Will Ferrell, Dr. Dre, Andre 3000, Jake Gyllenhaal, etc. were on the sidelines for games with national stakes over a decade ago? Celebrities love to be bandwagon fans. And no program embraces the spotlight more than USC. For a long time, USC had the Los Angeles market all to itself because there was no pro football. Now you’ve got the Rams and Chargers in town. So this is an important year.

USC is favored to win the league and is preseason No. 4 in the coaches poll. The Trojans also might have the best quarterback in the nation. Sam Darnold is the Heisman Trophy frontrunner and could be the No. 1 overall pick in the 2018 NFL Draft. Heck, at least two NFL teams – the New York Jets and the San Francisco 49ers – are tanking in the hopes that Darnold will turn pro early. Darnold guided USC to nine straight victories after the Trojans opened up 1-3 against a brutal schedule.

You should be happy if: They reach the playoffs
You should be terrified if: You see O.J. Simpson in the stands

There is no better example of what it’s like to coach in SEC than Texas A&M. It wasn’t too long ago that Kevin Sumlin was one of the hottest coaches in America and there was speculation that he would eventually land in the NFL. Remember the good ol’ days of Johnny Football? Well, those days might as well be the Stone Ages. Texas A&M has been angling to get out of the Kevin Sumlin business the past few years.

Kevin Sumlin has won 8 games in each of the last three seasons.

Jordan Rodgers won 9 games in his only full season as VU's starter. https://t.co/dq2uHYUZe5

It seems like every season the Aggies start out 5-0 and then falter down the stretch. Sumlin is going to have to win big against a difficult schedule to keep his job. Coaches Hot Seat ranks him third (Notre Dame’s Brian Kelly and Arizona State’s Todd Graham occupy the top two slots).

Let’s face it. Texas A&M would be totally happy fast-forwarding to December. Then the richest athletic department in the country can throw a bunch of cash at Chip Kelly. So why should you root for Texas A&M? Wouldn’t it be awesome for Sumlin to win double-digit games so he can give double middle fingers to all the haters?