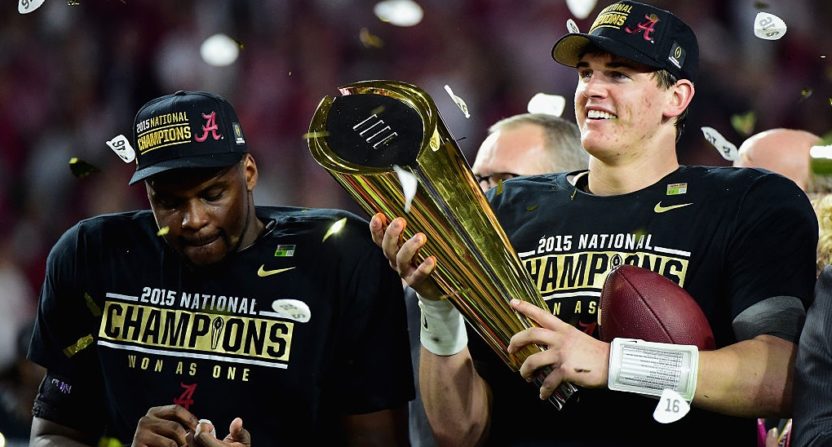 Before every college football season starts, it’s always fun to think about what can happen. Everyone is excited about their team — which games the team can win, which games the team can’t win, which games will be most exciting. When fans look at the national picture, though, they tend not to fall into that type of fandom. Instead, they pick their Playoff teams by who they think are best. The national college football media does the same. What neither fans nor the media do very often, however, is predict upsets.

It should be obvious why this is true, but it’s a little tricky unless it’s presented directly. When a fan or a media member is looking at, say, Florida State’s schedule and predicting which games are wins or losses, they never look at all games in aggregate. People only look at games individually. So when looking at Florida State’s schedule, we see 11 games they’ll be favored in (plus the ACC Championship Game) and one that they won’t. That makes for a likely 12-1 season, right? Sure, we point to the games the Seminoles might be upset in. And then we either pick the upset or we don’t. But no one ever looks at the season as it actually plays out.

No one ever circles the five games with about a 20% upset potential and says, “I have no idea which one it will be, but Florida State is probably losing one of these.” It’s not what we’re used to seeing, and everyone would think it weird if that’s what they started doing on ESPN. But that’s how reality works. It’s how the season plays out. There are five games that will require a B+ effort or better, and even really good college football teams don’t bring their best effort every game.

Alabama and Ohio State spoil us

Part of the reason we fall into this trap, at least nowadays, of assuming that favorites win just about every game is that Ohio State and Alabama do so. Alabama lost seven games in the past five seasons. Ohio State lost only six. Those numbers are, quite frankly, absurd. These two teams almost never get upset. They just don’t lose to teams that they aren’t supposed to, and certainly not more than once. With Alabama and Ohio State, predicting them to go 13-0 or 12-1 isn’t about not seeing the whole season in aggregate. Even when you do, we expect these teams to basically never lose.

Expecting that this trend will spread to other teams and programs is fallacious, though. Nick Saban and Urban Meyer have proven that they are able to create programs like this. We know it can’t last forever, but we won’t pick either of them to be upset until it happens at least once. Sure, a program might catch them for a year or two. But we never think either of those two will be upset by lower teams, because they proved to us that that won’t happen.

No one else has proven that — not Jimbo Fisher, not Dabo Swinney, not even Chris Petersen at Boise State, let alone at Washington. Thinking that there are five or more programs in the country immune to upsets is just wrong. There aren’t even three.

Too early to map out scenarios

At this time of year, everyone likes to ask what a team needs to get in the Playoff without winning its conference, or what a conference needs to get two teams in, or maybe even what scenario will allow a two-loss team to get in. And while it’s fun, it’s also impractical and silly. Is Florida State likely to win at least 11? Sure. But are the odds of it so high that it is practical to build up scenarios in which a two-loss Florida State team can make the Playoff? Not a chance.

Making up preseason scenarios involves predicting things so remote that the odds of the season shaping up that way are insane. How many permutations does a college football season have? Even if we remove all the games containing 30-point favorites (there have been upsets that big, though), the odds are astronomical. You have a better chance of winning the Powerball three consecutive times than you would have of picking a perfect college football season — even excluding games with 30-point favorites. So why, every preseason, do we pretend to be able to do just that when it comes to the top teams?

We do it because it’s fun. I’ve even slipped into it before; I’ll freely admit that. It’s fun to imagine scenarios that will challenge the committee. It’s fun to imagine scenarios that will infuriate fans. But it’s not at all practical. More importantly, it’s not at all meaningful. If we want to really wonder about the season that is rapidly approaching, we have to be far more willing to just accept what comes to us rather than wanting to be able to predict everything now. Remember, no resume exists in a vacuum. A scenario about one team’s Playoff chances has to include what resumes it is up against. And we’re only kidding ourselves if we think that’s remotely possible now.

How many teams really can run the table?

Let’s just remember this. In the first year of the College Football Playoff, six Power 5 teams lost fewer than two games before bowl season. In 2015, only five P5 teams completed the regular season with less than two blemishes. Last season, only four such teams can make that claim. History should teach us something. Power conference teams have a very difficult time skating through with just one loss, let alone zero. For all of the talk we have about who can go undefeated and whose schedule works out best, it almost never happens.

This brings us back to the initial fallacy I pointed out. You would be hard-pressed to come up with an answer if I ask, “Who will beat Wisconsin this year?” And yet, I can say that it is unlikely that Wisconsin starts 12-0. It is definitely possible, but unlikely. So who will beat the Badgers? I don’t know. At least one of Michigan, Minnesota, Northwestern, Nebraska, or Iowa. If you make me pick which one, I wouldn’t be able to. Wisconsin should be favored, at least slightly, in all of those games. But the odds say that at least one of those teams springs the upset.

As we move through the season, scenarios become clearer. Even early on, I will begin providing scenarios as the national landscape takes shape. Scenarios early in the season act more like archetypes than actual scenarios. It is always more about “how likely is it that a resume like this will make the Playoff” than it is about “this is what these teams need right now.” Doing anything like the latter, other than in extreme situations, is foolish early in the season. We should have learned this lesson early in 2014, when many declared the Big Ten “dead” in the Playoff race by mid-September, only for Ohio State to end up winning the national championship.

CFP Implications to watch for in Week 1

There are a lot of games during the first week of the season that can have a lasting impact on the Playoff race. As I have detailed above, pointing to which ones will is just guessing. It seems like a safe bet that Alabama vs Florida State will matter come the first weekend in December, but even that is not a guarantee. So what do we look for in Week 1? One type of thing we look for is a game where an upset is possible — and will make a conference look bad in the process. If, for example, Tulsa beats Oklahoma State, the Playoff chances of the whole Big 12 will be impacted.

Early-season perceptions often focus more on conferences than individual teams. As such, Week 1 will weigh on the ACC a lot, as three teams in the top half of the conference (Florida State, Virginia Tech, and Georgia Tech) face P5 opposition in national spotlight games. If the ACC goes 0-3 in those games and doesn’t look so great in doing so, we could see lots of questions about the conference early on. Similarly, the SEC plays six high-profile Week 1 games. The conference’s perception heading into 2017 is one of Alabama and a lot of dead weight. These games will give the conference an excellent chance to prove that isn’t true. But if the SEC flops in its Week 1 games, we could see a conference that will need to fight to prove that it deserves a Playoff bid if the unthinkable happens and Alabama slips up.

Also, because I like watching Group of 5 teams, I like to keep an eye on the Group of 5 contenders and see who can avoid picking up losses early. The AAC certainly has a head start before the race for that New Year’s Six bid has even started, but nothing is a given. That race is often determined far earlier in the season than the Playoff race is, where it usually takes much longer to weed out teams from the list of contenders.