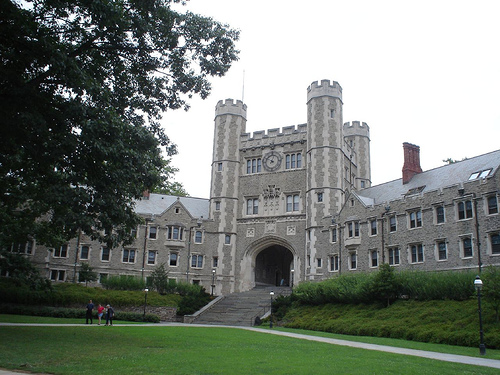 To complete the Ivy League hat trick of suspended athletic teams, Princeton has suspended its men’s swimming and diving team because of material found that “was vulgar and offensive, as well as misogynistic and racist in nature.”

In November, Harvard cancelled the end of their men’s soccer season after school officials found sexually explicit “scouting reports” on the women’s soccer team. They also put the men’s cross country team on probation for similar offenses and disgusting conduct. Columbia suspended its wrestling team after sexually explicit and racist texts written by team members were found by schools officials.

Here’s the full statement from the school on what they found:

“The Princeton men’s swimming and diving team has been informed by Ford Family Director of Athletics Mollie Marcoux Samaan and head coach Rob Orr that their season has been suspended pending a decision about the remainder of the team’s schedule.

The decision to suspend the season was made after a complaint earlier this week alerted the University to several materials, including content on the University-sponsored men’s swimming and diving team listserv, that was vulgar and offensive, as well as misogynistic and racist in nature.

“We make clear to all of our student-athletes that they represent Princeton University at all times, on and off the playing surface and in and out of season, and we expect appropriate, respectful conduct from them at all times,” Samaan said. “The behavior that we have learned about is simply unacceptable. It is antithetical to the values of our athletic program and of the University, and will not be tolerated.

“After reviewing the situation with Coach Orr, we have decided to suspend the season, and all associated team activities, effective immediately,” Samaan added. “In the coming days we will make a determination about the status of the team’s remaining schedule and we also will work collaboratively to determine additional actions aimed at education and positive culture building for the team.”

The team is currently scheduled for two remaining meets (versus Navy on January 7 and versus Harvard and Yale on February 5), along with the Ivy League Championships on February 22-25.

“The athletics department and the University are committed to providing an inclusive environment free from harassment and intimidation and characterized by mutual respect and concern for the well-being of others,” Samaan said. “In recent years we have worked closely with Princeton’s SHARE office (Sexual Harassment/Assault Advising Resources and Education) to provide educational and training programs for our students and our staff.

“One program developed by SHARE in conjunction with my office is SCORRE (Strength in Coaching on Relationships, Respect and Equality),” she added. “This program uses the bond between coaches and players to foster interactive dialogue and develop skills that promote healthy interpersonal relationships. Its modules cover such topics as respect, integrity, language, consent, and bystander intervention. We have also developed a program that will be introduced next month that focuses on the responsible and productive use of social media. We will continue to focus on such programs as well as redouble our ongoing efforts to achieve our primary goal, which is education through athletics.”

Amherst, not an Ivy League school but still a prestigious one, suspended its men’s cross-country team earlier this week after more racist and misogynistic made by team members were found in team-wide e-mail chains dating back years.

Almost nothing is private anymore, especially if you’re representing a school in athletic competition. And with heightened awareness and sensitivity to these comments across the world now, it almost seems inevitable that if found, the teams will end up suffering the rightful consequences.