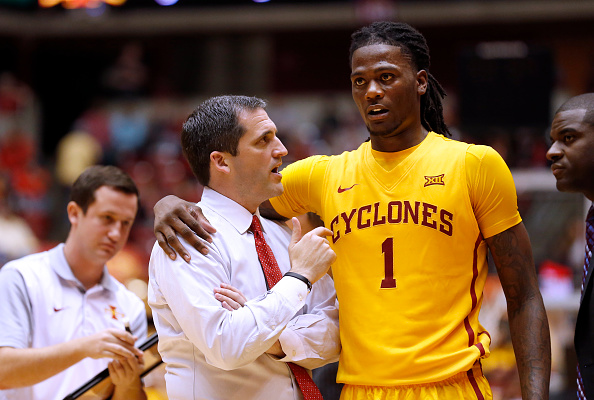 Based strictly on appearances, Steve Prohm looks like a lieutenant starring in a courtroom drama. You can picture it – straight out of central casting. He exudes a quiet confidence. He’s lean, well-groomed and his clothes seem to stay wrinkle-free. You keep waiting for him to have a confrontation with Colonel Nathan Jessup.

Prohm knows a little about movies. Long before he was the head coach of unbeaten and No.4-ranked Iowa State (8-0), he was a Blockbuster video store clerk in Tuscaloosa, Ala. In the summer of 1998, he needed to save money to start his coaching career with an unpaid position on Centenary’s staff.

Fast forward to the present. Prohm is in position to contend for a national championship. It’s not fiction. It’s reality. Last night was his Hilton Magic moment when Iowa State thwarted an upset bid by Iowa. The Cyclones rallied from a 20-point deficit to win on Monte Morris’ basket with 8.9 second left. They are one of ten unbeaten teams left.

It has been quite the career for Prohm already, and the 41-year-old is just getting started.

“You dream it,” the first-year Iowa State coach said. “You make the movie in your mind, the Hollywood movie; the bestseller, the blockbuster movie. You never know if it will really happen. I’ve been blessed.”

This fast start at Iowa State isn’t even close to Prohm’s longest winning streak. As a rookie coach at Murray State, he won his first 23 games. Thanks in part to current NBA point guards Isaiah Canaan and Cameron Payne, Prohm went 104–29 in four seasons at Murray State. The 2011-12 squad finished 31-2 and was the last unbeaten in Division I.

That success led to Prohm landing a primo job, one of the best a coach with only mid-major experience has ever received. When Fred Hoiberg left Ames to take over the Chicago Bulls, he left behind a stocked roster that was talented enough to be ranked No.7 in both preseason polls. The current ranking is the highest in school history.

Prohm isn’t The Mayor. Hoiberg is an Iowa State alum and played in the NBA. Prohm never even played major-college basketball. He had a one-year stint at Division III Oglethorpe University in Atlanta before quitting and transferring to Alabama where he was a student manager and staffer under David Hobbs.

Perhaps his humble background is one of the keys to his success.

Prohm connected with his players at Murray State. He was an assistant before he was promoted when Billy Kennedy left for Texas A&M. He continuously sought feedback from his players and tried to empower them. He rarely calls timeouts, preferring to let them figure things out. He doesn’t scream, saying it’s not in his personality.

All of that worked at Murray State. At Iowa State, he’s new to the players, the town and the fans. The learning curve is bigger, the pressure is bigger but so are the potential rewards.

“You’re walking into a lot of success that you weren’t a part of,” Prohm said. “You have to make sure you handle situations the right way. Handle relationships the right way and understand why they have been so successful. Fred did such a good job here.”

Prohm credits preseason All-American Georges Niang with helping him adjust and gaining the trust of his players.

“He gives me a good understanding about what the guys are thinking,” he said. “What they’ve done in the past. That’s a big, big help.”

How long will Iowa State perfection last? It’s early. The Cyclones face a road test on Dec. 22 at No.23 Cincinnati (8-1). The Big 12 schedule looms with the conference opener at No.7 Oklahoma (6-0).

“I hope we’re not playing our best now,” Prohm said. “I hope we have a large area to improve. We’ve still got January, February, March, April.”

Years removed from shelving the latest thrillers and rom-coms, Prohm hopes this season in Ames will have the happiest of endings.