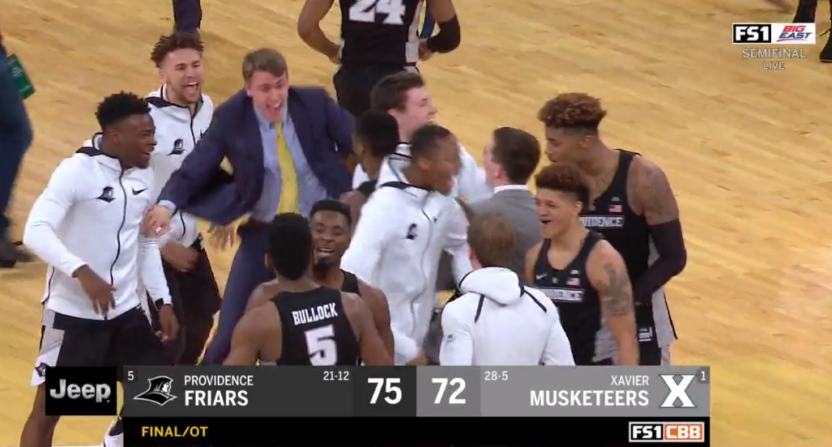 The Providence Friars trailed the nation’s No. 3-ranked Xavier Musketeers 52-35 with under 15 minutes left in the second half of Friday night’s Big East semifinals game, and incredibly came back to win the game 75-72 in overtime.

Providence — the No. 5 seed in the Big East tournament — actually erased the 17-point deficit in just 11 minutes, as Rodney Bullock hit this floater to tie the game 64-64 with 3:45 left in regulation:

The Friars had a one-point lead with the shot clock running down and under a minute to go in overtime, when Kyron Cartwright showed off some nice handles and drilled a jumper to give Providence a 73-70 lead:

A crazy, out-of-control sequence took place in the final 20 seconds, when Providence turned the ball over and Xavier looked like they were going to score in transition, but Cartwright drew a charge from Xavier’s J.P. Macura:

After Providence’s Alpha Diallo made two free throws to extend the lead to three points, Xavieir had the opportunity to tie it in the final seconds. But… they ran whatever this play is (a whole lotta nothing):

The Friars got their 75 points with a balanced scoring effort from the team; Bullock and Diallo had 17  points, Cartwright had 15 points, and Nate Watson had 14 points.

An amazing win for Providence, and a hugely important one as well. The Friars (21-12; 10-8) entered the tournament on the bubble, but now they shouldn’t have anything to worry about after a Big East Tournament win over the top seed and No. 3 team in the country.

As for Xavier (28-5; 15-3), the loss could cost them a No. 1 seed, especially if Duke knocks off North Carolina tonight in the ACC Tournament.

Providence will take on the winner of the Butler-Villanova game (happening right now) in the Big East title game on Saturday evening at Madison Square Garden.