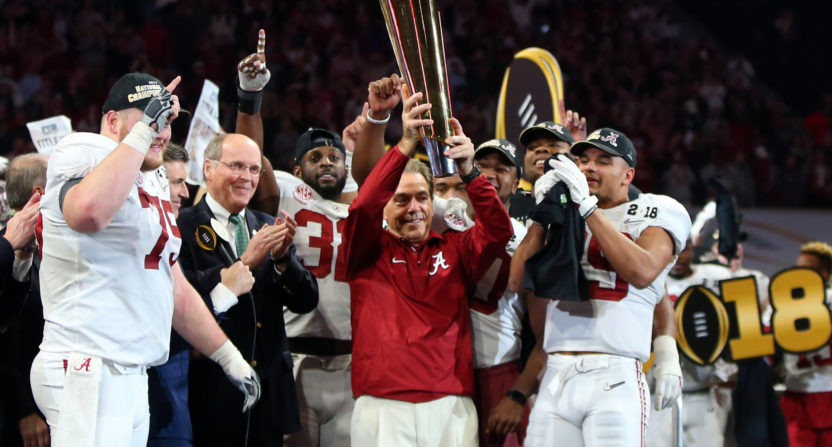 And then Monday night, in the College Football Playoff National Championship, Smith caught the game-winning pass from fellow freshman Tua Tagovailoa to give the school he wound up at an overtime victory over the one he spurned.

As Smith explained after Monday’s game, he initially committed to Georgia because of then-coach Mark Richt. When Smart took over, the new coach and his staff reportedly paid him no attention, causing him to re-open his recruitment. Via the New York Post:

“I committed because Coach Richt was there,” Smith said in the jubilant locker room. “When he left, I didn’t know what they were going to do, who would be the wide receivers coach. So I decommitted.”

Smith had committed to Georgia before Richt was replaced by Kirby Smart. Smart and his staff never reached out to Smith, a speedy four-star receiver.

We probably can’t blame Smart too much here. When a new coach takes over, he has his own priorities and his own favored recruits. Sometimes good players slip through the cracks. Sometimes those good players are fleet-footed receivers who grade out as the No. 62 player in their class. And sometimes they wind up signing with a conference rival.

Smith caught only eight passes for 160 yards this season for Alabama, but he sure made the last one count. And thus this tweet will forever live in infamy throughout the state of Georgia.

I'm officially decommitting from the University of Georgia