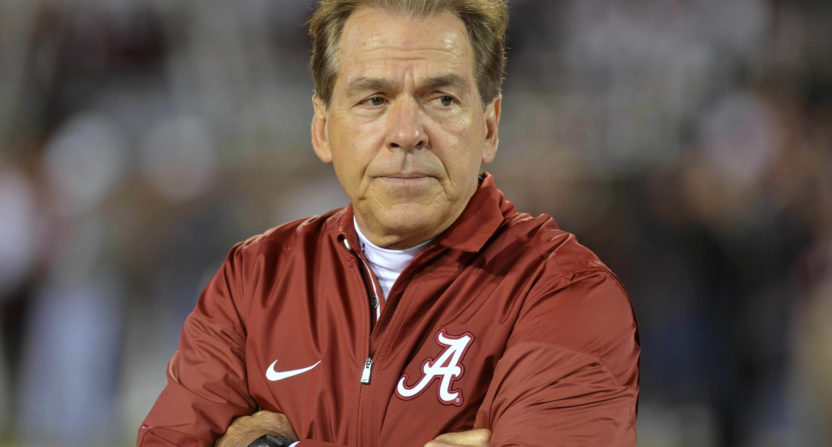 For years, the conventional line of thinking with college football was it was best to lose early than lose later in the year. There was evidence to suggest the weight of a loss later in the season had the power to drag a team down behind the competition in the race for a possible national championship; in an era where voters had the power to determine what teams would be deemed worthy of a national title opportunity. The College Football Playoff was designed to eliminate that stigma, but Alabama head coach Nick Saban says it is still best to lose early if you are going to lose. Of course, the problem here is, that is not necessarily true, and Saban of all coaches should understand that.

During the SEC spring meetings, Saban sat down with Paul Finebaum to discuss a number of topics, including Saban’s latest thoughts on strength of schedule and the College Football Playoff. Saban has always been vocal about his opinions regarding the direction of college football, and he tends to be a bit more progressive than others in his own conference. But his thoughts about when it is best to lose a game don’t quite have the legs to walk on at this point in time.

“This is one of the issues I have with the way we go through the Playoff, the whole deal is if you lose late in the season it has much more significant impact than if you lose early on,” Saban said to Finebaum. That was the line that grabbed the most reactions from across the college football landscape, largely because Saban’s own Alabama team managed to lose their last game of the regular season and was still chosen to play in the College Football Playoff. Saban couldn’t possibly be serious, right?

Not only did Alabama lose a game in November, the team the Tide defeated in the National Championship game, Georgia, also lost a game in November to the same Auburn team who beat Alabama. The only difference is that Georgia avenged their road loss to the Tigers with a victory in the SEC Championship Game. It ended up being Auburn, the last of the three SEC title contenders to lose a game before the bowl season, that was hurt the most by a late loss.

The previous season, national champion Clemson lost a game at home to Pittsburgh in November. On that same day, Washington lost a game against USC, only to eventually go on to the Playoff over two-loss Big Ten champion Penn State. Penn State lost both of their games in September, and they later defeated Ohio State, who was also chosen to play in the Playoff with just one loss.

Just in the last two seasons, the evidence appears to suggest a late loss isn’t nearly as catastrophic as it once was in older championship metrics and formats. In four years of the College Football Playoff, there have been five losses in November by teams that were selected, including two last season and four in the past two years. Two of those teams won the national championship.

Monthly tally of when a team takes a loss and still makes the @CFBPlayoff:

The College Football Playoff using a selection committee was meant to pull away from the idea of a loss later in the year being more costly to a team’s playoff hopes, and so far it seems that has been the case. But Saban’s continued thought does carry some weight in a hypothetical sense. As Saban went on to explain, the selection committee only getting to work in the last half of the season raises the importance of playing well later in the year, because that is when the committee will be more analytical with their weekly rankings and evaluations.

“[The] committee starts meeting in November so they start looking at you, and if you have a weak opponent or you play poorly during that time it can have a much greater impact than if you play a poor opponent or have a poor game in the second, third, or fourth game of the season. That really shouldn’t be that way because you want to look at the total body of work, but I think from a human nature standpoint and the way the committee’s put together and when they start meeting, that’s the way it is.”

This all ties back to Saban’s long-standing belief the SEC should be playing a nine-game conference schedule as the Big Ten and Big 12 currently play (the SEC plays eight conference games and requires one non-conference game against another power conference equivalent opponent each season), and would take away from the SEC having a schedule that is loaded with cupcakes before the final week of the regular season.

The SEC schedule has been a controversial topic for its late-season scheduling against creampuffs in the next-to-last week of the regular season, but the SEC balances that out with earlier conference tilts and a handful of conference members playing some of the most attractive non-conference games on the schedule in the first or last week of the regular season. That scheduling has reduced the risk of a conference playoff contender losing late in the season, however, which has irked critics of the conference.

As currently constructed, the College Football Playoff selection committee does evaluate all of the data for the entire season up to that point in time when the committee ranks their top teams on a weekly basis. If we are to take the Playoff at its word, each member takes into account everything that has happened that season equally, without evaluating a game in September differently from one in October or November. The catch is the committee’s opinions on a team in November could very well be different than it would be in September because of all the data that continues to be compiled along the way. A victory over a team in September could end up gaining value or losing value based on how the season plays out for an opponent.

Saban is not completely off the mark with the idea that a loss later in the year could impact a team’s playoff chances more than a loss early in the season, but there are far too many variables to figure out before determining if it is ultimately the difference between a team making the Playoff or not. The last two years have had scenarios in play where a late-season loss was not catastrophic, but each season plays by its own rules. Each season has different scenarios to evaluate. Maybe a late-season loss hasn’t hurt a playoff contender yet, but that doesn’t mean it won’t this fall, or next season, or the season after that.