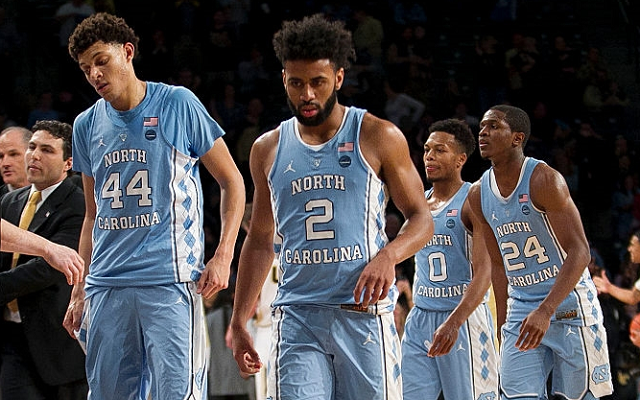 With several top players staying in school and holding off on their professional careers, top college basketball powers are facing unexpected challenges early in the season.

As a 17.5-point underdog, no one gave Georgia Tech (9-4) a chance to upset then-ranked No. 9/10 North Carolina on Saturday. However, behind possibly the most inexperienced team in college basketball, the Yellow Jackets stunned a loaded roster in a 75-63 win.

“And as the game went along, they got more confidence and more confidence. And we got tighter. I didn’t expect that, didn’t see that coming,” UNC head coach Roy Williams said in his postgame press conference.

Given the fact that star forwards Justin Jackson and Kennedy Meeks both returned to school after exploring their draft prospects last April, the Tar Heels’ defeat was extremely peculiar. Following a thrilling loss to Kentucky earlier in the month, Williams’ group clearly exhibited its ability to hang with the best. Yet UNC’s latest blemish was part of a string of madness courtesy of unranked programs during the previous week. For instance, Nebraska topped Indiana, who also held onto its own future NBA commodity in center Thomas Bryant.

In 2015, an abundance of underclassmen, like Karl-Anthony Towns, Jahlil Okafor, D’Angelo Russell and Justice Winslow, took the opposite approach and jumped to the pros. Due to a subsequent lack of individual dominance in college basketball, the underdog flourished, especially in the NCAA Tournament. Syracuse’s run to the Final Four represented just that. The Orange, who were a 10-seed, proved the separation between the top 25 schools and their rivals was slim. Heck, many believed they didn’t deserve a ticket to the Big Dance to begin with.

This season, college basketball fanatics are witnessing an unanticipated level of parity in Division I, despite numerous players gunning for another tournament run to boost their respective resumes. However, the dark horse programs have ended up creating disorder in that plan.

Take Minnesota. The Golden Gophers (13-2) were pegged to finish in the bottom tier of the Big Ten. Nevertheless, they picked apart No. 15 Purdue (12-3) in a 91-82 overtime win on Sunday. Similar to the aformentioned Jackson and Meeks, Boilermakers’ forward Caleb Swanigan reported back to West Lafayette, Ind. for his sophomore campaign.

Despite a 26-point, 22-rebound effort from Swanigan, Minnesota guard Nate Mason generated a career-high 31 points on a mere 18 field goal attempts (61.1 percent), as well as only one turnover, to ignite the shocking victory. More impressively, the junior outproduced Purdue’s backcourt single-handedly, as Dakota Mathias, P.J. Thompson and Carsen Edwards combined for 23 points and 10 assists.

Nate Mason: "So excited to get this win. In huddles, we were locked in. Everybody was locked in, (saying), ‘We’re not giving this one up.’"

Before pulling away in the extra period, the two teams continuously traded blows. In total, the affair featured five ties and six lead changes. Taking into account that Minnesota recently fell to Michigan State — who were without forward Miles Bridges, due to an ankle injury — the Gophers’ ability to bounce back displays the strength of the conference as a whole.

Down south, TCU (11-2) also provided some intrigue in an 86-80 loss to No. 3 Kansas (12-1). The Horned Frogs weren’t supposed to amass much interest in 2016-17, sitting last in the Big 12 Preseason Poll. On top of that, while neither guards Frank Mason nor Devonte’ Graham attempted to evaluate their worth at the NBA Draft Combine, both still possessed the opportunity to follow the route that former teammate Wayne Selden Jr. did. Hence, alongside renowned guard Josh Jackson, the Jayhawks formed a formidable test for first-year head coach Jamie Dixon.

My surrogate uncle, @franfraschilla, has always said that TCU is a sleeping giant. Tonight is a prime example of why. Nearly beat Kansas.

However, TCU responded well in its Big 12 opener, collecting a crucial 28-point, nine-rebound performance from forward Vladimir Brodziansky. The 6-foot-11, 220-pound junior hasn’t shown the utmost consistency thus far, averaging 11.8 points and 5.4 rebounds per contest. But performances like this one will give the Horned Frogs a chance to challenge Baylor and West Virginia. For now, though, the tightly contested defeat proves there’s equality throughout the conference.

Even DePaul (7-8) almost delivered a monumental upset over No. 1-ranked Villanova (14-0). Finishing in the cellar of the recently restructured Big East Conference for the past three seasons, the Blue Demons somehow clung to a one-point lead with under four minutes to go and came inches away from sending the affair to overtime off a last-second heave.

Billy Garrett gets a great look straight on but his 3 rims out at the buzzer. #1 Villanova avoids a HUGE upset with 68-65 win over DePaul.

Furthermore, Villanova boasts one of the top scoring duos in college basketball in guard Josh Hart (20.3 ppg), a Naismith Player of the Year contender, and forward Kris Jenkins (13.4 ppg). Both considered the option of turning pro several months ago. Despite the seeming difference in talent and experience, DePaul presented Villanova with one of its toughest matchups of the season thus far.

However, just a week into conference play, the startling parity within college basketball has yet to fully develop this season. We’ll likely see several more upsets and tight contests over the next couple of months. Like ex-NFL wideout Terrell Owens once said, get your popcorn ready.