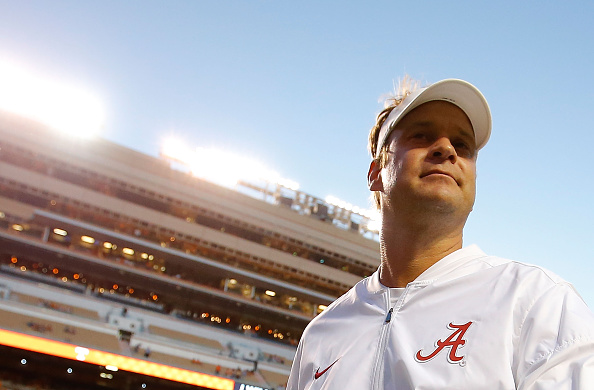 Head coach at Florida Atlantic isn’t exactly where many thought Lane Kiffin would wind up.

Yes, Kiffin’s stock as a head coach was pretty low after USC fired him at the airport partway through the 2013 season. Still, the job he’s done as offensive coordinator over the last three years at Alabama (three playoff berths and one national championship so far, with three different primary quarterbacks no less) seemingly would have had him on the radar for big head coaching jobs again, rather than taking a substantial pay cut to go coach in Conference USA.

However, according to a piece from USA Today‘s Dan Wolken, the only other school to even seriously consider Kiffin as head coach was Houston (which wound up going with their own OC, Major Applewhite, and making a lot of reporters look silly in the process). Wolken writes that administrators and search firms weren’t high on Kiffin, especially after calling people he’d worked with at Tennessee and USC:

As it turned out, Kiffin’s cavalier attitude toward pushing boundaries in his one year at Tennessee, the train wreck ending at Southern Cal plus questions about his personal maturity (Kiffin’s divorce earlier this year didn’t help matters) had all conspired to leave such a negative impression on the industry that administrators largely shied away.

Though Kiffin’s name was brought up for multiple jobs across the last three years, nearly all of it was speculation and smoke rather than genuine interest in him. One person with knowledge of the matter, who had investigated Kiffin for a job, said reference calls to people who worked at USC and Tennessee basically rendered him unhireable.

“Unhireable” is certainly a strong word, but it’s easy to see why many former colleagues weren’t big fans of Kiffin. This is the guy Al Davis fired in a vicious and detailed press conference, saying “I think he conned me like he conned all you people.” (The Raiders went 4-12 in Kiffin’s full season as head coach, 2007, and started 2008 1-3 before he was fired; they finished 5-11.) This is the guy who jumped ship from Tennessee after one 7-6 season, angering his players in the process. (The Vols went 6-7 the next year.) This is the guy who USC fired at the airport in 2013 after 10-2 and 7-6 seasons and a 3-2 start; the Trojans finished that season by going 7-2 under interim coach Ed Orgeron.

So, firing Kiffin certainly hasn’t made many programs much worse, and in the case of USC, it made them better. Hiring him is a much more risky gamble. While he found great success as Alabama’s OC, some other Nick Saban assistants haven’t proven too outstanding as head coaches, and thriving as a coordinator doesn’t ensure success in the head coaching ranks. In some ways, Kiffin’s previous head coaching experience may actually hurt him, especially with those reference calls; if he was a coordinator who’d never been a HC and still found the success he did at Alabama, bigger schools might be interested. This explains why Kiffin decided to take a pay cut to move to FAU, though. At the moment, it’s about the only head coaching shot he’s got.