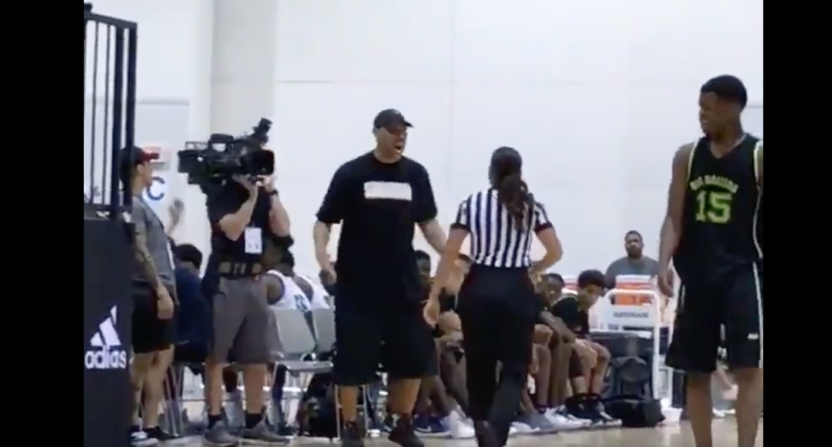 LaVar Ball continues to do shitty stuff, up to and including outright sexist behavior. The first sign of that was when he told Fox host Kristine Leahy to stay in her lane, and then doubled down by creating a t-shirt with the slogan. Fantastic stuff.

On Friday, Ball was fulfilling one of his seemingly endless parental responsibilities by coaching his son’s AAU team when he received a technical foul. The ref who handed it out was a woman, and that seemed to make LaVar mad. (Hmm.) Things devolved from there:

That Adidas so willingly capitulated is a hollow and transparent display, and the organization that provided the officials for the tournament apparently agreed:

The group that supplied officials for the Adidas Uprising Summer Championships, in which LaVar Ball successfully petitioned for a female referee to be replaced after she gave him a technical foul on Friday, will terminate its five-year relationship with the sneaker company due to the incident.

“The events that led to the removal of a female official on Friday are something that shall not and will not be accepted within the officiating community,” Court Club Elite, an organization that trains and develops referees at amateur and professional levels, said in its statement to ESPN. “Adidas and their leadership acted in a manner that does not parallel our views on integrity or professionalism, and neither should be compromised as they were in this situation. It was clear that the actions of the official in enforcing and addressing unsporting behavior were defendable and fitting of the behavior displayed; however, the agenda and lack of courage to do the right thing by Adidas leadership sent a clear message that the game and those chosen to protect the integrity were not of priority.”

Kudos to Court Club Elite for their principles. At a certain point, people are going to have to stop enabling this immature manchild at every turn, right?