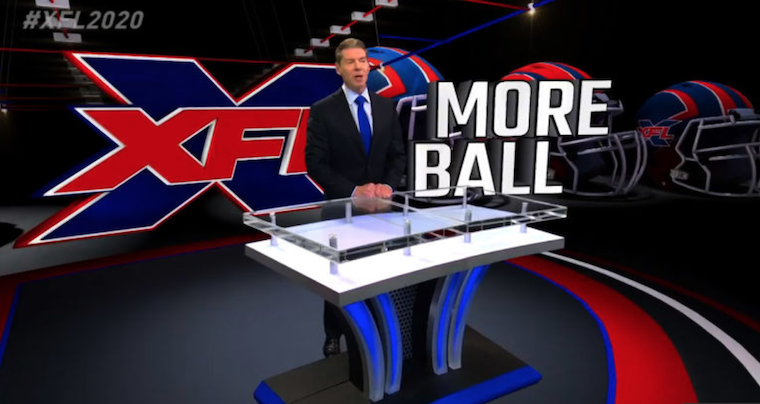 The XFL is officially making a comeback, but it’s far too early to say just how the league will fit into the current football landscape. Most of the focus has been on whether or not Vince McMahon’s pro football league could be a viable alternative to the NFL, learning from the mistakes made in the XFL’s first and only season in 2001.

But how could the XFL affect college football? That was quickly a discussion topic on Reddit among fans after the XFL announced its return.

With a few years to sort through the feedback from fans, the WWE and the XFL will attempt to learn from their past and build a brand of football that can stand on its own two legs for more than one season. With so much uncertainty surrounding this revival, there is no legitimate line of thinking that suggests the XFL could put a dent in college football. Yet the college game could be at more risk if the XFL can become a stable product.

Any hint that the XFL will crack the college football model was probably put to rest right away by Vince McMahon’s initial comments about the tentative plans for the league. With a targeted starting date in late January or early February, the XFL is clearly attempting to follow the wave of the Super Bowl into its season to keep football going.

That timing may not be a huge concern for college football, as players will either still be in school to finish their degrees or training for a shot at impressing NFL scouts at the scouting combine. Any player even thinking about playing professionally in January or February will have their sights set on the NFL Draft, not the XFL.

What could become a possibility, however, is the XFL could go scratching for underclassmen who declare for the NFL a year early and end up not getting drafted. In this scenario, the XFL could provide an opportunity to immediately jump in a competitive environment and build some actual game film with the hopes of getting an NFL training camp invite later in the year.

The revival of the ill-fated XFL has a number of alums eager to see what happens, including Purdue head coach Jeff Brohm. Brohm played quarterback for the Orlando Rage back in 2001 and was responsbile for one of the XFL’s most famous (and infamous?) interviews.

I still have a pulse… pic.twitter.com/YCleuOEyC1

Now Purdue’s head coach, Brohm will be in a unique position to inform his players about the possible benefits of playing in the XFL. But will he face convincing players to stay in West Lafayette rather than jumping to a possible paid opportunity in the XFL?

Brohm is not the only XFL product involved in coaching today. Western Michigan head coach Tim Lester is also a former XFL player who looks forward to seeing the league return. As he noted to The Athletic’s Chris Vannini, the fledgling league is another opportunity to pursue a career in football, which could have some ramifications for the college game down the line if the money is right.

“It’s a great thing for an opportunity. That’s what it comes down to,”Lester told The Athletic of the announcement. “The opportunity to develop is so small in our sport, compared to baseball and basketball. There’s not a lot of opportunities. Obviously, there were some quirks in the rules, but the game was pretty much the game.”

None of this would seem to be a major threat to college football — not yet at least. The XFL will have to prove itself a viable and well-maintained structure that can last a couple of years and provide an actual opportunity before it can be considered any sort of threat to the college football model.

But if nothing else, it could provide an outlet for players who made a mistake in declaring for the NFL too early. Time will tell just how much the XFL plays a factor, so, for now, it’s all a guessing game.