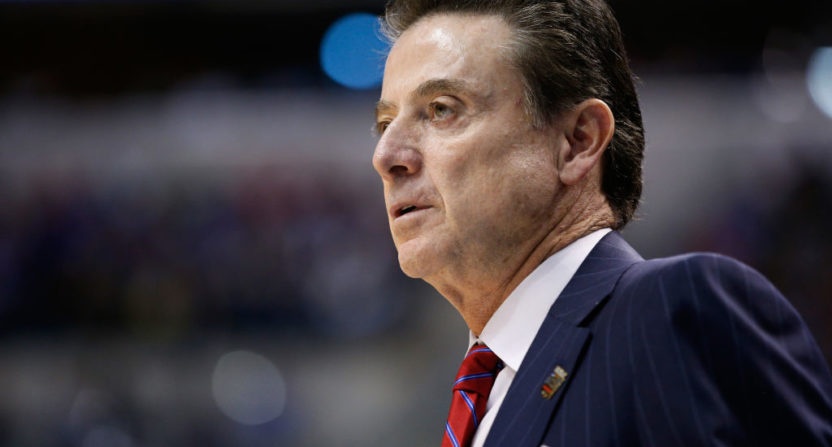 Former Louisville head coach Rick Pitino is doing everything he can to attempt to clear his name while the dust settles from the fallout of a massive FBI investigation that rocked the college basketball world. Pitino, who was fired by Louisville after it was discovered an Adidas representative was conducting illegal business with various assistant coaches at partner schools, sat down for an interview with Jay Bilas of ESPN and said definitively that he had no knowledge of any possible wrongdoing by his staff by claiming he passed a lie detector test.

“I was asked two questions,” Pitino said in his interview with Bilas. “And I said, ‘I want you to ask me if any other recruits in my tenure were ever given anything.’ And he [the polygraph examiner] said, ‘That’s not what we’re here for. We’re here for: Did you have any knowledge of the [recruit Brian Bowen] family getting any money? Did you have any knowledge of an Adidas transaction?’ I answered ‘absolutely not’ on both questions and passed the lie detector test. So I had no knowledge of any of this.”

Watch more of his interview with Jay Bilas on SVP after the Wolves-Spurs game. pic.twitter.com/e67Lf6mE5f

Of course, lie detector tests are not a flawless method of separating the truth from falsehoods. I’m guessing Pitino expects nobody is watching TruTV outside of the NCAA basketball tournament. Adam Ruins Everything previously pointed out the flaws of the lie detector test.

There is a chance Pitino was naive to any shady activity going on under his watch, but enough evidence had been piling up with the Louisville program under Pitino’s supposedly not-so-watchful eye that he had long lost the benefit of the doubt.

Pitino’s standard go-to defense anytime something fishy popped up with the Louisville program was the obvious and most common one; he didn’t know about any suspicious activity going on in his program. For any coach, it is the standard operating procedure to deny and deflect accountability, although as the head coach the fingers will always point toward you no matter what. It was just two years ago Pitino denied having any knowledge of members of his coaching staff setting up potential recruits with prostitutes on campus visits. Somehow, Pitino survived that crisis. And yet again, Pitino is digging in his heels and defending himself by trying to deny any knowledge of anything illegal or against NCAA rules going on with his program.

And you have to believe him, because he passed a lie detector test in which he was 99 percent sure what questions were going to be asked of him. Right?

Pitino is all in on the idea he is an innocent man who has been wronged. In response to a report saying Pitino received 98% of Louisville’s Adidas contract money, Pitino says that information was leaked by the school to make him look bad.

“That was leaked by the board of trustees to the president to make me look bad,” Pitino said. “I’ve had a contract with Converse, Nike [and] Adidas. … That was my endorsement deal with Adidas and had nothing to do with the university. They just leaked that out to try and make me look bad, look greedy … because I’ve always had that deal.”

Pitino continues to suggest he and Louisville were lucky to land the commitment of Brian Bowen, who reportedly was funneled $100,000 for signing at Louisville, although he does admit to not having any concrete evidence to support his claim.

“He fell into our lap in recruiting. Obviously, now with the circumstances behind it, there’s more to it than meets the eye,” Pitino explained. “But I believe Brian Bowen chose the University of Louisville because he loved the visit, he loved his future teammates and he wanted to play for me. I don’t think he’s involved in this in any way. Now, am I being naive? I don’t know. I just believe in that young man.”

Maybe Pitino should have Bowen take a lie detector test.